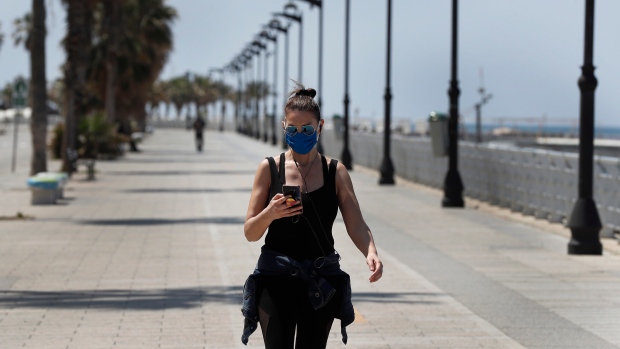 TORONTO — Want to know how many people in your neighbourhood have taken a COVID-19 test? A new website tracking self-reported symptoms lets you find out — and contribute to the data yourself.

COVID Near You is an initiative created by epidemiologists and software developers from Harvard University, which maps out where cases of COVID-19 could be, based on data from users of the website.

The tool was recently expanded to include Canada after being launched in the U.S. in collaboration with the Centers for Disease Control and Prevention.

And it was inspired not by the most recent pandemic, but by a fictional one depicted on the big screen.

John Brownstein, chief innovation officer at Boston’s Children’s Hospital and a professor at Harvard Medical School, said that developers and researchers “started on this journey about nine years ago.”

“It was actually around the movie ‘Contagion,’ that we launched as part of that movie,” he told CTV News Channel on Sunday. The 2011 film followed the spread of a fictitious pandemic.

Brownstein had already launched one website tracking infectious diseases worldwide — HealthMap, which was made in 2006.

But ‘Contagion’ made Brownstein and other founders think more about the need to aggregate public health information on a scale that wouldn’t be possible by government-run testing.

“(It’s) this idea that we can engage the public in public health by having people report their symptoms and tell us about illness in the community around data that we actually don’t have access to generally,” Brownstein said.

“Most of the data we get is from people’s interactions with health care, but it doesn’t count the massive amount of mild illness in the community — and we know that’s actually true for COVID as well, huge amounts of people sick, but no testing available to know how many people are actually getting ill.”

This is where COVID Near You comes in. So what does the website do?

When you go to the COVID Near You homepage, you are asked a simple question: “How are you feeling?”

If you answer that you’re feeling good, you are prompted to offer information on whether you’ve received a flu vaccine, your age, gender and the first three letters of your postal code.

Healthy individuals filling out the survey is “really important too,” Brownstein said.

“Because that gives us a denominator to really understand what the rates are in the community around illness.”

If you say that you’ve been under the weather, you are asked to select your symptoms from a list. The list includes symptoms commonly associated with COVID-19, such as shortness of breath, cough and a fever, but also includes some symptoms that have been associated more rarely with the virus, such as diarrhea, or a rash.

After you select symptoms, a series of more detailed questions pop up, asking you when you started feeling ill, whether you’ve been to see a doctor, how long you’ve been quarantined, your travel history, and whether you believe you’ve been in contact with someone infected with COVID-19.

Depending on how you answer, you may be prompted to offer whether you’ve taken an official COVID-19 test or been hospitalized.

At the end, you will also be asked for demographic information and your partial postal code.

Your data will then join the data of thousands of other Canadians, and will be plotted on an interactive map that displays with coloured dots how many people have reported COVID-19 symptoms, and how many have reported taking a COVID-19 test within the past two weeks.

It also displays how many people have filled out the questionnaire on the website. As of Sunday morning, around 44,500 people within Canada had put their information into the survey.

Want to see your neighbourhood in particular? Simply type the first three letters of your postal code into the search bar above the map, and the map will inform you how many people within that area have taken a test or reported symptoms, as well as how many people in that area had filled out the survey.

Brownstein said that they had collaborated with public health officials in Canada, as well as the University of Toronto, in order to make the Canadian version of the tool.

If this new tool sounds familiar, you may be thinking of “flatten.ca” a similar website created by Canadian university students in March to aggregate self-reported potential cases.

Flatten operates by the same principle as “COVID Near You” — users fill out a survey to report symptoms and other relevant information, then offer the first three letters of their postal code so that a heat map can be made showing the data.

And while Flatten is based only in Canada, COVID Near you also has pages for the U.S. and Mexico.

Although the sites have significant overlap, having more than one website tracking self-reported data potentially means that a greater number of individuals could be reached.

Brownstein explained that these type of tools “help (to) really understand what’s happening at the community level.

“What we’re trying to do is arm public health officials with the right amount of data in real time about what’s happening, where we are with cases, how many people have been infected, what emerging hotspots are out there, is social distancing working,” Brownstein said of COVID Near You.

“Ultimately, this is a tool that could be helpful not only for COVID, but in future respiratory infectious diseases, which we know we’ll have in the future as well.”