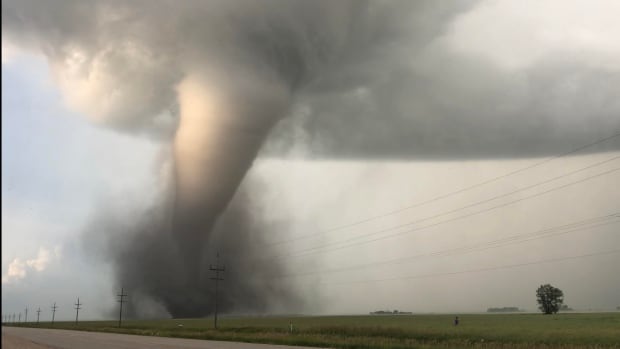 STARS air ambulance was dispatched to the Virden, Man., area, after a tornado touched down on Friday evening.

Environment and Climate Change Canada was tracking a severe thunderstorm that produced a tornado near Scarth, Man., which is 13 kilometres south of Virden and nearly 275 kilometres west of Winnipeg, at 8 p.m. CDT.

STARS was dispatched shortly after 8:30 p.m., according to its Twitter account. CBC News has contacted STARS for more information but has not yet heard back.

“We got on the storm, and it started to intensify very quickly. Rapid rotation,” said Iwasiuk. “We really didn’t have to move, it was coming right for us, so we just sat on the highway and watched this very large storm cross the highway behind us.”

The couple set up about 8-16 kilometres east of where the tornado landed and waited for the twister to touch down, said Jayjack, who caught the tornado on video.

“At first it looked like a cloud of smoke on the ground,” Jayjack said.

“When it fully condensed it hit a farmhouse, it crosses the road, and goes into a field to the east of the farmhouse.”

When the storm went into the field, Iwasiuk said a feeling of “awe” came over her and she cried.

“I got emotionally overwhelmed. It was an amazing sight to see,” she said.

“Then, unfortunately, we witnessed it doing some pretty severe damage, which was really gut-wrenching to watch happen.”

Once the storm cleared, the couple moved toward the farmhouse that the tornado appeared to hit. They were first on scene, said Iwasiuk, and nobody living in the farmhouse was home.

The house itself was OK, added Jayjack, “but a lot of farm equipment was destroyed.”

Grain silos were hit, and several vehicles were picked up off the road and thrown around the house and into the neighbouring field, he said.

Social media posts from other storm chasers also said vehicles were tossed around by the tornado.

A red Jeep Grand Cherokee was upside down near the driveway of the farmhouse with someone trapped inside, the couple said.

“We yelled out to see if there was anyone there, and that’s when I heard that someone was strapped into that vehicle,” said Jayjack, adding that they immediately called 911.

The man had asthma but no other injuries, so Jayjack and Iwasiuk kept him talking until first responders arrived.

Another two vehicles were in the middle of the field neighbouring the farmhouse. At least one of them was a pickup truck, said Jayjack.

Iwasiuk was on the phone with 911 and didn’t take photos of the scene in the field, “but it didn’t look good from my perspective,” she said.

The storm also tore down power lines as well. At one point there were more than 500 Manitoba Hydro customers without power, but as of 12:45 a.m. Saturday, Hydro’s outage map showed that only five customers near where the tornado touched down were without power.

Iwasiuk and Jayjack left the scene once emergency workers and Hydro arrived, both had heavy hearts.

“As much as it’s incredible to see [a tornado], it’s really hard when there’s destruction and damage, and people’s lives have been impacted,” said Iwasiuk. “It’s very sombering and my thoughts are with everybody.”

Late Thursday night, Manitoba Premier Brian Pallister sent out a tweet, saying his thoughts and prayers are with area residents and the emergency responders attending to the recovery effort.

Our thoughts and prayers go out to the residents of Virden and the emergency responders dealing with the aftermath of the Tornado – please stay safe.

The tornado was on the ground for about 10 to 15 minutes in all, said Jayjack.

“It was an incredible tornado. It was very powerful, very big. Unfortunately, somewhat damaging.”

Iwasiuk said it was the largest tornado she has ever seen.

“I wouldn’t be surprised if it got a really high rating,” she said. “It was very big, and quite violent.

“It was a very surreal scene. I’m still having a hard time wrapping my brain around it.”

Environment and Climate Change Canada no longer has a severe thunderstorm warning in effect over the Virden-Souris area.