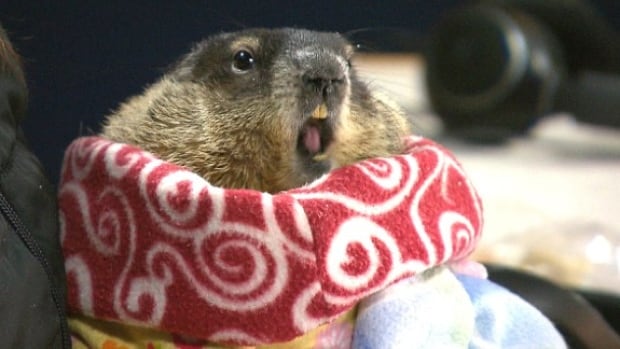 Winnipeg Wyn, an orphaned Manitoba woodchuck that helped mark the passage of Groundhog Day each year, has died.

The Prairie Wildlife Rehabilitation Centre announced the woodchuck’s passing this weekend on Facebook, explaining she had been fighting an infection under the care of a veterinarian for the last few months.

While Groundhog Day celebrations in the province also include Manitoba Merv, Merv is in fact a puppet, while Wyn was a real animal.

She arrived at the rehabilitation centre when she was a week old in spring 2016, the Facebook post says, after she was found orphaned at a fire station. It was believed that her mother was trapped and relocated.

The post says she couldn’t be returned to the wild because she was very curious about humans, so she was welcomed into the centre’s education team.

“Wyn had visited many schools and community groups, helping to educate the public on how to co-exist with our wild neighbours,” the statement on Facebook says.

“Unfortunately, she took a turn for the worse and it was time to say goodbye.”

Rather than watching to see whether the groundhogs observe their shadows on Feb. 2, staff at the Prairie Wildlife Rehabilitation Centre watch for the animals’ level of activity. Lots of action indicates an earlier spring, they said.

Staff at the centre have said the life expectancy of woodchucks ranges from four to six years.