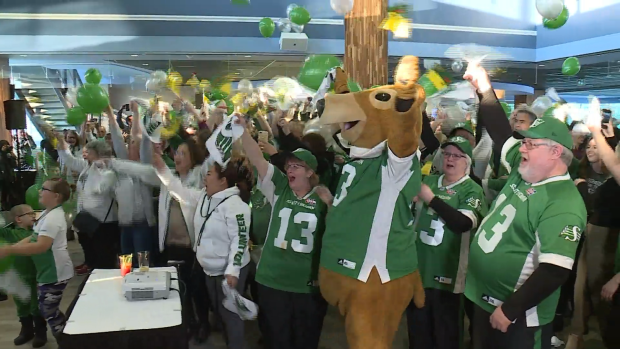 REGINA — Grey Cup week in Regina won’t go ahead in 2020, according to the CFL.

The event was scheduled for Nov. 22 at Mosaic Stadium.

“We are quite disappointed,” CFL Commissioner Randy Ambrosie said at a town hall Wednesday. “With all the things all of the things going on with the pandemic, having a traditional Grey Cup just is impossible.”

The CFL has awarded Regina the 2022 Grey Cup.

“Along with the Riders we made the decision that we would shift the Grey Cup away from Regina this fall. We’ve awarded the Grey Cup 2022 to the Riders and the province of Saskatchewan,” said Ambrosie.

Next year’s event will take place in Hamilton. That host city was announced last year and work is already underway for the festival.

“The COVID-19 pandemic continues to cause uncertainty across the country and across the world, and the ability to host the 2020 Grey Cup to the scope and scale that our fans expected was becoming less and less likely,” Grey Cup Festival Co-Chair and Saskatchewan Roughrider President Craig Reynolds said in a news release. “Pair that with the need to allow for as much time as possible to have a 2020 season, and we know this is the right decision for the CFL, our Club and for our fans.”

The league also announced on Wednesday that play won’t start before September. The league has discussed pushing back the season, with a potential December Grey Cup.

“We’re even looking at how we extend our season,” Ambrosie said. “In the spirit of looking at all possibilities were even considering pushing the game back a little bit, giving us a little bit more elbow room, so that we have the possibility of getting games in this year.”

Grey Cup tickets hadn’t gone on sale yet for the general public, but seats were sold to Riders’ season ticket holders. The club says a $50 per seat deposit will secure a seat for the 2022 Grey Cup Festival in Regina and the balance will be refunded automatically.

The Riders say season ticket holders will also get an email on Wednesday with information on the shortened season.