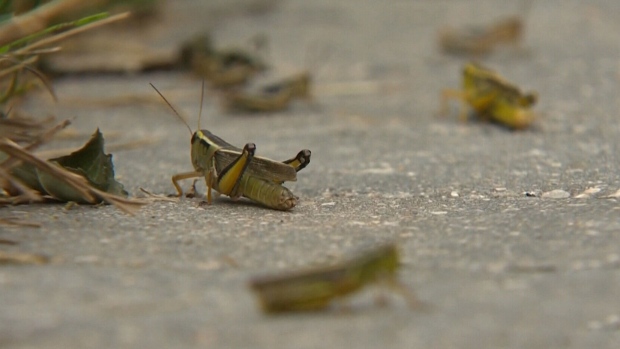 WINNIPEG — Grasshopper numbers are on the rise in Manitoba, and they’re more than just a nuisance.

If you’ve spent time in your garden or backyard this summer, you may have noticed an uptick in a particular type of hungry herbivore.

Entomologist Taz Stuart said he’s been getting lots of calls about the hoppers over the last few weeks.

“Currently, we are starting to see a lot more grasshoppers and crickets, which is part of the natural cycle as it was very wet last year,” said Stuart.

Grasshoppers lay their eggs in the soil, and last year was prime conditions for the insect.

According to Stuart, last year was a very wet season, and wet soil increases the survivability of grasshoppers for the following year, causing an increase in population.

“In your backyard, they’re feeding on your peppers, on your peas, and that makes people upset,” he said.

Stuart said grasshoppers are only a nuisance in the city, but they can cost food producers money outside the city.

The Manitoba Crop Pest Update released by the province on August 19 said grasshoppers continue to be the insect of greatest concern for agricultural producers.

Bill Campbell, the president of Keystone Agricultural Producers of Manitoba, said they’ve seen an increase in grasshoppers throughout the province.

Campbell doesn’t believe the bugs will affect the sustainability of Manitoba’s farms.

“It just adds to the cost,” said Campbell. “These grasshoppers will mature, lay eggs, and what population will there be next year is always an impact as well.”

Campbell said it’s up to every producer to monitor the effects of pests on their farm.

He said some farmers have sprayed the perimeter of their fields to fight off the insects.

Campbell said the impact of grasshoppers can vary based on region, soil type, and precipitation.

Stuart said a surge in an insect population, like grasshoppers, is a common occurrence.

Stuart recommends not getting rid of backyard pests yourself. He suggests you seek out a professional with a pesticide applicator license.