WINNIPEG — Google has released updated data showing where Canadians are going in the age of physical distancing due to the COVID-19 pandemic.

The search engine released its latest community mobility reports on April 16, which includes data recorded up to April 11.

The first batch of data was released April 3, and covered the period from February 16 to March 29. 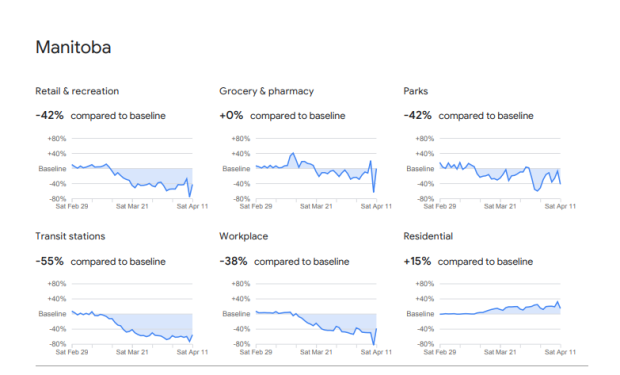 (Physical distancing data for the Province of Manitoba. Source: Google)

In Manitoba, visits to retail and recreation places, such as restaurants and cafes, is down 42 per cent compared to the baseline number. It’s a slight increase from the first set of data, which saw a 49 per cent decline.

Visits to grocery stores and pharmacies saw an increase, and have returned to the baseline average. According to the previous data, those stores saw a 21 per cent decline.

Transit stations are down 55 per cent from the average, a one per cent increase from April 3.

Manitobans also appear to be visiting parks less, as the data shows a 42 per cent decline in visits compared to the baseline. On April 3, park visits were down only nine per cent.

Fewer Manitobans are heading to their workplace, as Google recorded a 38 per cent decline since February 16. The decline was at 36 per cent on April 3.

The number of Manitobans staying at their homes has increased by 15 per cent compared to the baseline average, up from 11 per cent.

The province has been under a state of emergency since March 20. On March 30, public health orders were issued, limiting public gatherings to 10 or fewer people, and closing non-critical businesses. The orders have since been extended to May 1.

The new orders include a mandatory 14-day self-isolation for anyone coming into Manitoba and a restriction of travel north of the 53rd parallel.

As of Monday morning, Manitoba has reported 253 cases of COVID-19 and five deaths.

Google has said it will provide regular updates to the data, and said it is making the data public to help public health officials make decisions to flatten the curve.

The company uses aggregated, anonymized data on movement trends to help create the data. Google said no personally identifiable information, such as contacts, movements, and location, is made available.

The reports can be read here.