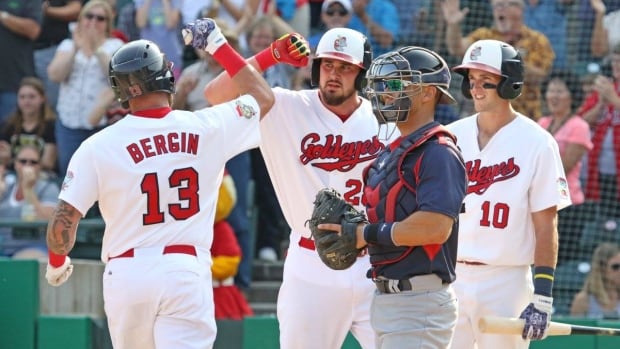 The Winnipeg Goldeyes will be playing ball this summer, but Winnipeggers won’t be flocking to Shaw Park to buy peanuts and Cracker Jack, or to root for the home team.

The American Association of Independent Professional Baseball announced Friday that six of the league’s teams will compete in a 60-game season in three hub cities this summer.

“We are very happy to be able to return professional baseball to our fans, albeit in a different fashion than usual,” said league commissioner Joshua Schaub in a news release.

A short spring training will start June 25 , with opening day on July 3. The regular season will end Sept. 10, and a five-game series between the two teams with the best records will decide the league champs.

The league isn’t releasing the full schedule until Monday, but says games will be hosted in Fargo, N.D., Milwaukee, Wis., and Sioux Falls, S.D.

Teams will play 42 of their 60 games in their hub city to limit travel while the COVID-19 pandemic continues.

The Winnipeg Goldeyes — the only Canadian team in the league — will be playing home games in Fargo.

The schedule would allow for them to return to Shaw Park for home games if Manitoba’s public health restrictions allow for games with fans in attendance, the league said in a news release.

But in its own news release, the Goldeyes said that won’t be happening, citing provincial and federal regulations regarding gathering sizes and cross-border travel.

The province has previously said it does not expect large gatherings or events to resume in Manitoba before September of this year.

Team general manager Andrew Collier said in the release that the Goldeyes hoped home games could happen given the improving COVID-19 situation in Manitoba, where there were only five active cases identified as of Friday.

“We are obviously disappointed, but understand, and fully support, prioritizing the health and safety of all Manitobans,” Collier said.

The Goldeyes will contact ticket holders and corporate partners who made payments in advance, they said.

The league says it will experiment with new roster rules in the shortened season.

There will be no minimum or maximum number of rookies, LS players — those with one to six years of service — or veterans on a team’s 23-man roster.

Players signed with ball clubs that are not participating this season may be drafted by teams that are playing, “to allow the best possible talent available to play this season,” the league said.