Home  »  News   »   ‘Get ready to shovel’: La Nina is here and that could mean a colder, wetter winter for much of Canada 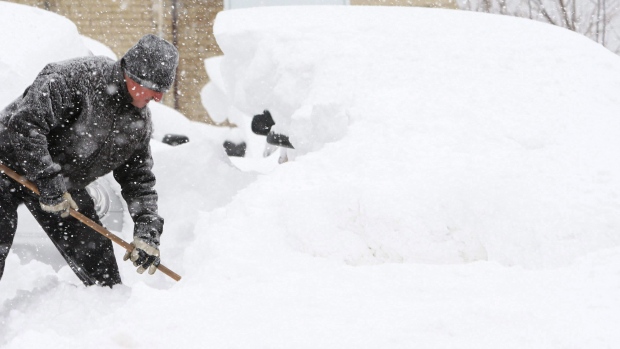 TORONTO — As if 2020 wasn’t challenging enough, Canadians in most of the country should be prepared for a colder and wetter winter season thanks to the arrival of La Nina in the Pacific Ocean.

On Thursday, the U.S. National Oceanic and Atmospheric Administration (NOAA) announced the arrival of the natural weather phenomenon that appears every three to five years.

CTV’s Your Morning meteorologist Kelsey McEwen explained that La Nina gradually develops when the westward trade winds in the equatorial region of the Pacific Ocean – the west coast of South America – intensify. As a result, the stronger winds push warm surface water to Indonesia and Australia, which allows for deep, cold water to rise to the surface along the South American coast.

“It’s called upwelling… all this cold water deep in the ocean basically comes to the surface, and it drops the temperature,” McEwen said during a telephone interview with CTVNews.ca on Friday. “What that does is it cools the surrounding atmosphere.”

While this activity is happening in the tropical Pacific, McEwen said it can have a dramatic impact on temperature and precipitation conditions in North America and the rest of the world.

In Canada, McEwen said La Nina will likely affect British Columbia, the Prairies, Ontario, and Quebec while the territories and the Maritimes will be less impacted.

“Think cold and wet, basically, as the big takeaway,” she said. “It’s going to mean likely a wetter-than-normal winter for B.C., for Ontario, for Quebec, in particular, and then in the Prairies, it could mean colder-than-normal temperatures.”

McEwen stressed that it won’t mean the entire winter will be wet and cold for those regions, but when there is precipitation in Ontario and Quebec, for example, there could be a lot of it and the Prairies might have to deal with some extended cold spells.

As for the Maritimes, McEwen said those provinces won’t be as affected simply because of their distance from the Pacific Ocean.

South of the border, La Nina has already made its presence known with its impact on the Atlantic hurricane season.

McEwen explained that La Nina has been brewing for some time and it results in the weakening of the winds between the ocean surface and the upper levels of the atmosphere or the “wind shear.”

“The best way to picture it is like corkscrewing in the atmosphere,” she said. “It’s wind changing direction and speed with height so as you go higher up in the atmosphere, the wind almost corkscrews and this wind shear is detrimental to hurricane development.”

An environment with lots of wind shear will prevent hurricanes from developing, McEwen said.

La Nina, however, reduces the amount of wind shear in the Atlantic basin, thus creating optimal conditions for hurricanes to develop.

“This is a global impact,” McEwen said. “Yes, it’s in the Pacific, but we look at that area to basically define our entire planet, because we’re all connected through the atmospheric circulation.”

The 2020 Atlantic hurricane season has already been more active than most, McEwen said, with a tropical storm named Sally expected over the weekend.

“The fact that we are already at “S” [in the alphabet for naming tropical storms] is unreal,” she said. “And we’re not done yet. We’re going to November so we will likely run out of names and then at that point they go into the Greek alphabet. So it’s a huge year for sure.”

McEwen said La Nina will likely peak during the winter months before easing in the spring; however, that could change because the atmosphere can be unpredictable.