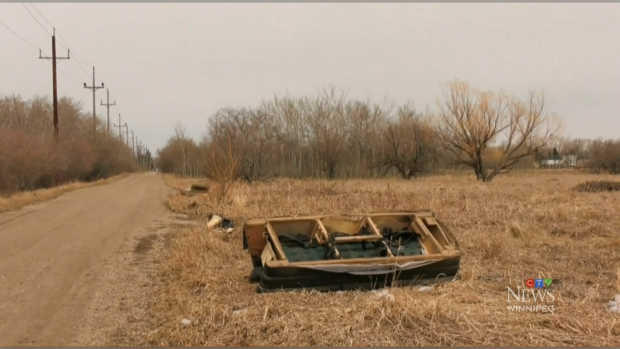 WINNIPEG — Residents in the Charleswood area have noticed garbage piling up along Harte Trail.

The Friends of Harte Trail group has been tasked with cleaning it up.

“Spring is when you see a lot of these things come up…so we deal with that the best we can.”

The six-and-a-half kilometer trail is part of the Trans-Canada Trail, it runs through Charleswood from Shaftsbury Boulevard to the Perimeter Highway.

Friends of Harte Trail have a green team, but Jenkinson said he isn’t sure if they’ll be able to operate this year.

“Majority of the trash that we deal with is picked up by volunteers,” said Jenkinson.

“Our board members, who do a heck of a lot of work.”

He said the 4R depots, as well as the Brady landfill, are open during COVID-19 measures.

“There was some dumping that happened along Wilkes (Avenue) that we’re addressing,” said Klein.

“I don’t think that there’s people doing it because there’s nowhere else to put it; I think it’s lazy.”

Klein said his biggest concern is people not respecting the physical distancing measures while on the trail.

He said he’s in talks with public works to install signs that will remind people to keep a safe distance.

Green Action Centre said the public is noticing an increase in litter in all areas of the city.

“Hold on to your trash until you see a trash bin,” said Roussak.

“Recycle everything that is accepted by our city’s recycling facilities, and then try your hand at composting.”

Roussak believes people are forgetting to be mindful of the environment because they’re concerned about COVID-19.

Jenkinson is facilitating a spring clean-up along Harte Trail, hoping to clear some of the garbage that’s piled up.

He said littering along the trail is like littering in your own home.

“Keep in mind it is your trail, it’s everyone’s trail,” said Jenkinson.