Home  »  News   »   From Spanish Flu to COVID-19, a Manitoba centenarian weighs in on pandemic life

There was no social distancing in Jemima (Mime) Westcott’s small Manitoba farm community when the Spanish Flu hit over a century ago.

School remained in session and her mother provided an oiled cloth to put over her face when needed, Westcott — now 109 years old — recalled Thursday.

The cloth was a way to try to prevent catching the virus from those believed to have it.

“You would breathe in the eucalyptus,” said Westcott. “It was just a handkerchief that we had in our pockets.”

The Spanish Flu was first identified in 1918 and it caused the deadliest pandemic of the 20th century.

It’s estimated 500 million people — about one-third of the world population at the time — became infected with the H1N1 virus, and at least 50 million died, according to the Centers for Disease Control and Prevention.

Canada was also hit hard. About 55,000 people in this country — most between the ages of 20 and 40 — were killed by the previously unknown form of influenza, the Canadian government says.

The disease spread westward after arriving in port cities of Montreal, Quebec City and Halifax, and transmission intensified with the war effort as troops travelled by train across the country, according to a history post on the government’s Parks Canada website.

While there were attempts by municipal and provincial authorities to prohibit public gatherings and isolate the sick, rates of infection grew. The economy was paralyzed and many health-care workers helping the sick were infected, the post says.

“There was one lady at the very edge of town,” she recalled. “We passed that way going into school. We used to put our handkerchiefs over our nose. We weren’t sure if her germs were getting out to the road.

“But she was an older lady and she survived.”

Westcott, who resides in a personal care home in Brandon, Man., is a little hard of hearing now but remains sharp. She reads the newspaper regularly and has been following the COVID-19 developments.

“I’d like to think we’ll get through it OK,” she said. “But so many people have died though. It’s an awful flu.”

Westcott, who grew up near the small border town of Lauder, Man., is the middle child of 11 kids. She became a teacher near Douglas, Man., and met her husband at the school. 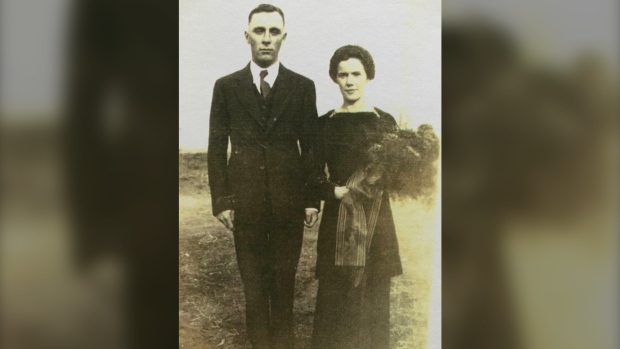 Jemima Westcott is pictured with late husband Reginald in a family handout photo. There was no social distancing in Jemima Westcott’s small farm community in Lauder, Man., when the Spanish Flu hit over a century ago. THE CANADIAN PRESS/HO

Mime Westcott had five children with Reginald Westcott, who died in 1963.

“I did farm living when I was growing up,” she said. “I don’t overeat. I don’t drink much, (only) occasionally. I don’t smoke. I have my three meals a day. I always have my porridge.

“I’m not a worrier, I think that’s the main thing.”

Westcott primarily keeps to her room these days and keeps in regular contact with family over telephone and video calls.

As with other health crises, a lot was learned from the impact of the Spanish Flu and the country’s response to it. The pandemic resulted in the creation of the federal Department of Health in 1919 — later renamed Health Canada — and made public health a joint responsibility of different levels of government.

Asked if she had a message for Canadians about how best to deal with a pandemic, Westcott kept it simple.

“Stay home for one thing,” she said. “(People) don’t need to get out. If everybody does that, how’s it going to spread?”

This report by The Canadian Press was first published April 16, 2020.