Home  »  News   »   From deflated to elated: Retooled Winnipeg Jets do enough to win ‘backs to the wall’ rematch with Calgary 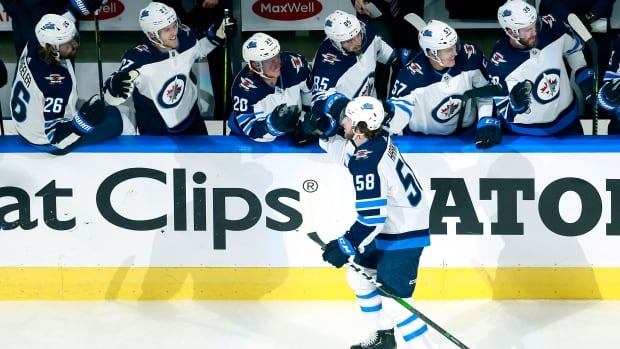 When you combine their output, Winnipeg Jets centre Mark Scheifele, sniper Patrik Laine and fourth-liner Mason Appleton scored 62 of the 213 goals their team deposited in opposing nets during the regular season.

That seemed like a daunting task, considering Calgary seemed to fly around the Jets like dragonflies in Game One on Saturday and also pushed Winnipeg around like a blow-up dinghy on a windy day.

Yet the same Jets that seemed to have no in-game ability to compensate for the loss of Scheifele alone during Game One showed up for the rematch with a different attitude, along with a different lineup.

Winnipeg defeated Calgary 3-2 in a game were they matched the Flames’ muscle, skated in a higher gear and mostly — though not entirely — avoided the distraction presented by Matthew Tkachuk, the alleged bad guy/absolute villain in the Scheifele injury.

“When your mindset is simple, I think that’s when the game opens up a bit more,” Jets forward Jansen Harkins said following the game during a virtual scrum with reporters.

Harkins drew into the lineup on Monday and managed to score the first goal of the night for Winnipeg — along with his first NHL playoff goal.

He finished off a first-period sequence that started when Jets defenceman Tucker Poolman dug the puck out from behind his own net and allowed forward Jack Roslovic to chip it up ice to Adam Lowry, who feathered it over quickly enough to give Harkins a partial breakaway and enough room to beat Calgary goalie Cam Talbot on the glove side.

Harkins came into the game to play on the wing with Lowry, who scored in the second period by backhanding a rebound off a long shot by defenceman Josh Morrissey.

After the game, Winnipeg coach Paul Maurice said  it was deflating to deal with three injuries after a mid-summer training camp where almost every member of the Jets was healthy for the first time.

“Those kind of backs-against-the-wall games don’t happen very often,” Maurice said. “I’m proud we won the game in the manner we did, with the injuries we had and the season that we’ve had.”

The game-winner was scored by a Jet who could have ended up Monday’s goat — that is, the ravenous, scruffy farm animal, as opposed to the Greatest Of All Time.

Under pressure against the boards in his own end in the second period, Ehlers coughed up the puck to Calgary’s Elias Lindholm, who only took one stride in the slot before he beat Jets goalie Connor Hellebuyck.

Ehlers then took a penalty when he seemed to lose his cool with Tkachuk, but that amounted to nothing, as Calgary had almost as much trouble organizing its power play on Monday as Winnipeg had on Saturday.

Ehlers redeemed himself by tipping down a Neal Pionk wrist shot that ended up dribbling past Talbot.

Nikolaj Ehlers scored the winner for Winnipeg who equalize their series with Calgary at 1-1 after a 3-2 victory in game two. 1:15

“That’s not usually my spot on the power play,” Ehlers said after the game. “I know what I need to do in there and I was lucky enough to get a stick on that puck.”

Ehlers had been playing chippy all game, leading Maurice to note the Dane is tougher than opponents may think.

Neither the Jets nor Flames will have time to think about much of anything before they meet next: Game Three of this series starts at 5:45 p.m. Winnipeg time on Tuesday.

The Winnipeg win ensures there will be a game four, to be played this Thursday.