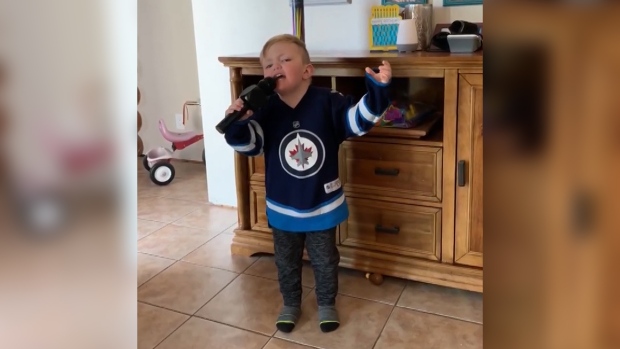 WINNIPEG — A four-year-old Winnipeg Jets fan making the most of self-isolation with his parents has garnered the attention of the National Hockey League and the Winnipeg Jets along with hundreds of other people across social media.

Ryan Palsson convinced his mom to record a video of him singing both the Canadian National Anthem and the Star Spangled Banner. Ryan’s mom says he is a huge Jets fan and normally likes watching Stacey Nattrass, the NHL national anthem-singer for the Jets, belt out the anthems.

But with home-isolation and the COVID-19 pandemic forcing the NHL to postpone the remainder of the season, the boy from Riverton, Man., decided to bring some of the game to his home.

Decked out in his Winnipeg Jets jersey and equipped with a toy microphone, and after receiving an introduction from his mom behind the camera, Ryan belted out the national anthems.

“They were all pretty bored, so he wanted to be introduced just like they do at the Jets game,” said Ryan’s mom Angie.

“He loves to sing. He’s always been very keen on music. When he listens, he seems to very intently listen to what’s being played.”

Since posting the videos, Angie said both the NHL and the Winnipeg Jets have asked to share the videos, and Stacey Nattrass even commented on the videos.

Angie said Ryan got his musical talents from his great grandmother, Dorothy Johnson, who played with Johnny and his Musical Mates, a folk band that gained popularity in the 1950s across Manitoba.

“I think she always saw something special in this one,” Angie said.

As for why Ryan wanted to post the videos, he has a very simple answer.