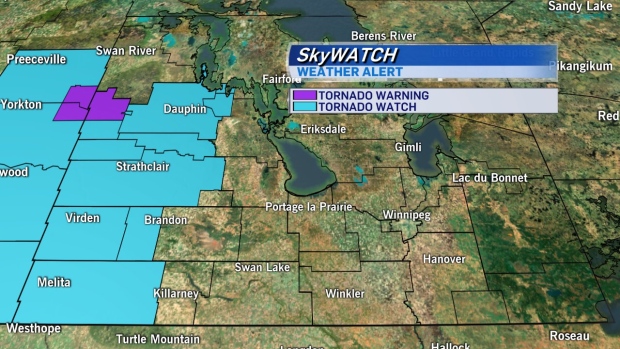 WINNIPEG — A tornado warning, which has since been downgraded to a severe thunderstorm warning, and four watches were issued in parts of western Manitoba Tuesday evening.

On Tuesday, around 6:30 p.m. Environment Canada issued a tornado warning for the Dauphin – Russell – Roblin – Winnipegosis area. By 6:45 p.m. the warning was downgraded to a severe thunderstorm warning, though a tornado watch remains in the area.

Environment Canada said conditions are favourable for severe thunderstorms to develop, which could produce tornados.

“Isolated to scattered thunderstorms are expected to develop later this afternoon over southeastern Saskatchewan and southwestern Manitoba,” the statement from Environment Canada reads. “Some of these thunderstorms may produce a tornado.”

Environment Canada said this is a dangerous and potentially life-threatening situation.

It said if a tornado warning is issued, people in the area are told to leave mobile homes, vehicles, tents, and trailers and head indoors to a room on the lowest floor away from walls and windows, such as a basement, a bathroom, stairwell or interior closet.

Manitobans can report severe weather by sending an email to MBstorm@canada.ca or tweet reports using #MBStorm.

-with files from CTV’s Danton Unger