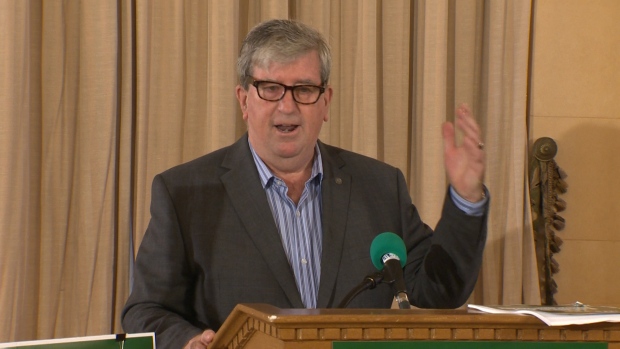 WINNIPEG — Glen Murray, who is a candidate for the federal Green Party leadership, released his plan on Wednesday on how to end poverty in Canada.

The former Winnipeg mayor said his program could bring most Canadians out of poverty within a few years.

Murray said this plan would be able to be implemented at the national level without affecting provincial programs.

He added his plan is already 93 per cent paid for by changing existing tax provisions and less than seven per cent comes from new tax revenue.

“That’s a very different kind of approach than anyone else is talking about,” said Murray. “If anyone can figure out a better way to this, (that’s) great. I put this out there to start a positive conversation because CERB is not sustainable for three or four years, it’s sustainable for a few more months.”

Murray said his plan would not add to the federal deficit or debt.

The Essential Workers Benefit would provide low-income workers in fields such as healthcare, childcare, and food distribution with an additional $4,800 per year.

The Family Benefit would see families receive money for each child they have, depending on their age.

The Senior Benefit would see seniors who are eligible for Old Age Security lifted out of poverty, the plan states.

The Care Benefit would allow Canadians who are receiving average provincial disability social assistance benefits to have their income increased by $7,200.

Murray said the federal government should include his plan in its budget right away.

“We have a crisis here,” he said. “I don’t want Canada to have a Thelma and Louise moment where we all go over the cliff together. We need to avoid it and we need to do something about it.”

Murray said he is sending out his plan to many of his friends in the government and is going on a cross-country tour to promote it.

Murray was Mayor of Winnipeg between 1998 and 2004, before serving as Member of Provincial Parliament in Ontario with the Liberal Party between 2010 and 2017.

In addition to Murray, David Merner is also running for the leadership of the party.