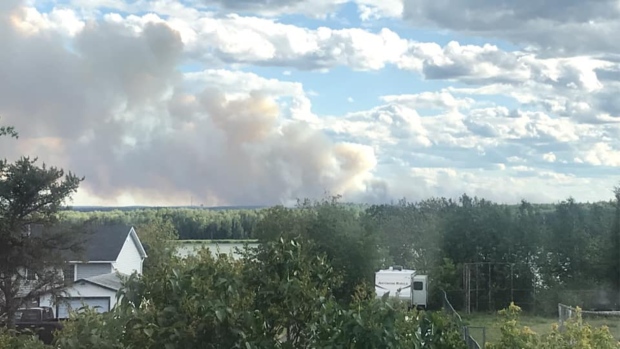 WINNIPEG — Residents of Red Lake, Ont., are being told to evacuate the community as a forest fire raging nearby has jumped in size on Wednesday.

A forest fire map on the Ontario government’s website shows the fire near the community has grown to 750 hectares in size as of Wednesday morning.

“We are asking all residents to immediately evacuate from the municipality,” said Mayor Fred Mota Wednesday morning.

Mota said approximately 3,800 people have already evacuated from the area. The municipality has a plane on standby that can carry 115 passengers out of the community to a safe location.

The Ontario Government said the Ministry of Natural Resources and Forestry (MNRF) provided an aircraft to help people evacuate the area, and said Tuesday that 60 people flew out of Red Lake to Thunder Bay.

A spokesperson with the government said they will also help evacuate residents from Eabametoong First Nation on Wednesday.

“Vulnerable residents from the community will be flown to Thunder Bay and provided accommodations and support,” the spokesperson said in a statement. “At this point, we expect that 200 individuals will be in the Thunder Bay area, but that number is fluid and based on the flights that take place today.”

The spokesperson added the City of Timmins will also accept evacuees from the First Nation.

Late Tuesday, the fire was at 550 hectares in size, and moved east from its origin in Madsen, Ont.

“What that means to the Municipality of Red Lake is that the fire is now blowing towards the community,” he said, noting it was approximately two kilometres away from the municipality.

The MNRF have worked to slow down the progress of the fire using an aerial attack, heavy equipment, and Initial Attack FireRangers throughout the day.

“As of this morning, we have eight helicopters on the fire, with other helicopters doing spotting, because our fire areas are high to extreme,” Mota said adding water bombers are also being used to fight the fire, but are currently facing difficulties due to the smoke in the area.

Mota said the fire risk throughout Northwest Ontario is high to extreme through the entire region.

“We’re hoping no other fires pop up,” he said.

The Ontario Provincial Police said it is still investigating the cause of the forest fire, but said investigators do not suspect foul play or arson at this time.

Those in the community who need assistance with evacuating are asked to call 807-727-7106 or email municipality@redlake.ca.