TORONTO — Two teenagers are believed to be among the five people found dead inside a home east of Toronto early this morning following a shooting at the residence.

Officers were called to a house in Oshawa, Ont. at around 1:20 a.m. after receiving “numerous calls” for a reported shooting, Const. George Tudos told reporters at the scene on Friday morning.

“We had multiple units responding from all our divisions, including our tactical support unit,” Tudos said.

“When they arrived on scene, they actually did also hear what they believed to be gunshots coming from a residence. They were eventually able to enter one of the residences…where they made a grisly discovery.” 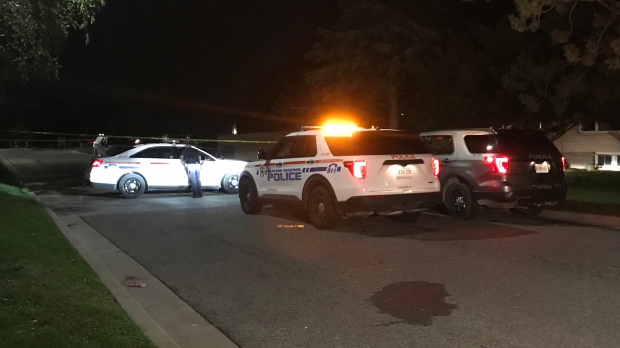 Police initially said four people were found dead inside the home but later confirmed that a fifth body had been subsequently located.

Four males and one female are among the dead, police confirmed on Friday morning.

Tudos said a woman who was also found inside the home suffering from a gunshot wound was transported to hospital in serious but non-life-threatening condition.

The deceased victims, Tudos said, are believed to be three adults and two children in their early teens.

“We are still waiting for the coroner to attend and hopefully he will give us a little bit more information as to ages and identification of the deceased parties,” he added.

Tudos said police are not currently searching for any suspects.

“We believe that one of the deceased inside that residence is the alleged suspect,” he told reporters.

Police say they are also investigating a white Ford pickup truck that was parked on the street overnight.

Neighbours told CP24 that they have never seen the vehicle, which appears to be from Western Canada, on the street before.

Tudos said it is too early to comment on the circumstances that led up to the shooting.

“We are in the early stages of this investigation,” he said. “Right now we are holding the scene and waiting for our homicide team to arrive and kind of get a better understanding of what exactly happened and what led to this shooting.”

Neighbours say that a husband and wife, who work as teachers, have lived at the home with their four children for many years.

Police have not confirmed if the victims resided at the house or were visiting the residence at the time of the shooting.