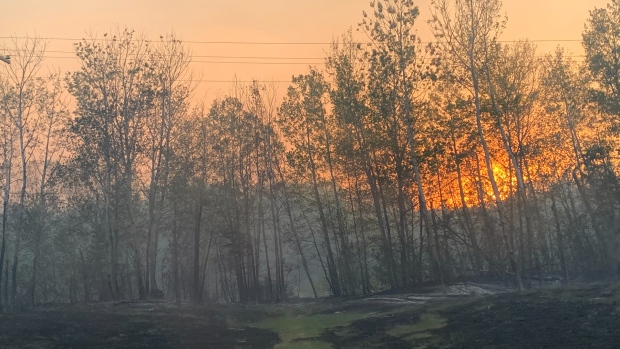 WINNIPEG — As a wildfire in Beaver Creek Manitoba continues to burn out of control, Manitoba Conservation says six cottages have been damaged by the fire already.

As of Tuesday afternoon, Manitoba’s fire map has listed the wildfire as ‘out of control.’

A provincial spokesperson told CTV News the fire started at a peat harvesting area in the region, but the exact cause remains under investigation.

The wildfire, which started on Monday afternoon, burned through the night as the Manitoba Wildfire Service, along with the help of the Gimli, Arborg, and Riverton municipal fire departments, continued to fight the fire Tuesday.

The map lists the size of the fire as being more than 600 hectares large.

Beaver Creek is located about 90 kilometres north of Gimli along the shores of Lake Winnipeg.

A spokesperson for Manitoba Conservation told CTV News as of Tuesday morning at least one shed has been damaged by the fire in addition to the six cottages.

They said permanent and seasonal residents have been evacuated.

On Monday evening, a resident in the area told CTV News the smoke was so thick it was difficult to see.

The provincial spokesperson said value protection teams have set up sprinklers on properties in immediate danger, including the local cottages and the Beaver Creek Bible Camp.

EDITOR’S NOTE : The Province of Manitoba website originally listed the cause of the wildfire as lightning, but has since said this was an error in reporting. The story has been updated to reflect the cause of the fire remains under investigation.