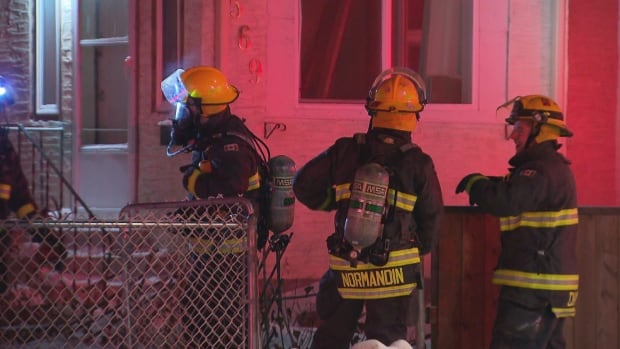 A man faces multiple charges after a fire broke out in a building in Winnipeg’s Centennial neighbourhood and two people were assaulted, police said Thursday.

Firefighters and police went to a multi-family home on McDermot Avenue, a few blocks away from the Health Sciences Centre, around 7:30 p.m. Wednesday, a police news release says.

Patrol and tactical support officers went to the fire because police were told a person inside might be armed.

Officers believe a man who was visiting the suite was under the influence of meth and was paranoid. He started a fire by putting his shoes in an oven, police said.

Other tenants in the building heard a bang and that there was a fire. As they were leaving, they came across the man, who was allegedly armed with a knife.

A man who lives in the building was stabbed once, which caused a minor injury. He was taken to hospital, treated and released. A woman was hit with an unknown object.

Tenants used fire extinguishers before firefighters arrived. Once they did, crews extinguished the fire.

There was extensive fire, smoke and water damage done to the house.

Firefighters didn’t find any other people or weapons.

A 48-year-old man was arrested, taken to hospital, treated and cleared for medical release.

He faces numerous charges, including arson with disregard for human life, arson causing damage to property and assault with a weapon.

He was detained at the Winnipeg Remand Centre.