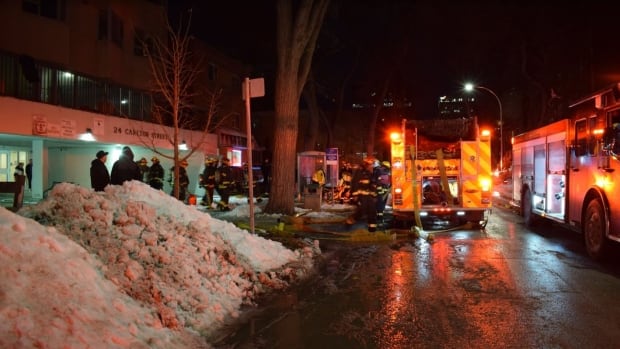 Three residential fires broke out within the span of about two hours in Winnipeg Sunday night, leaving some families unable to return home.

The earliest fire of the night occurred in a house under renovations on Helmsdale Avenue, just before 8:30 p.m.

When they got there, firefighters encountered heavy smoke coming from an exterior wall. Firefighters needed to enter the home in order to extinguish the fire.

Everyone in the home was able to get out on their own and there were no injuries reported as a result of the fire.

Less than an hour later, around 9 p.m., first responders were called to a house fire in the Minto area.

Smoke and flames were coming from the exterior of a one-and-a-half storey home on Ashburn Street when crews arrived, according to a news release late Sunday.

The residents of the home left the burning house on their own. Two neighbouring homes were also evacuated as a precaution.

Winnipeg Transit buses provided shelter for those forced out of their homes.

No injuries were reported. Crews were expected to be on the scene into the night.

Both fires are still being investigated to determine the cause. Damage estimates were not available.

Winnipeg Fire and Paramedic Service fire operations chief Steve Kumkah said another fire broke out in a fifth floor suite of an apartment building on Carlton Street shortly before 10:30 p.m.

Heavy smoke flowed throughout the downtown tower, he said.

Several people were forced out of the building, and one person was evacuated for medical reasons.

Damage and cause of the fire are still being investigated, according to the fire chief.