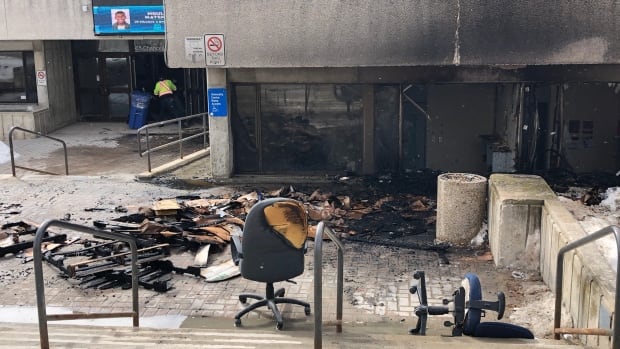 A central building at the University of Manitoba sustained “considerable damage” Friday afternoon, after a fire at a site where a group of students were living and sleeping outside as a fundraiser.

Several U of M students were staying outside University Centre this week as part of Five Days for the Homeless — a national charity campaign where university students live outside for five night in March.

Just before 1 p.m., firefighters responding to a call found a pile of wooden pallets engulfed in flames outside the bottom level of UMSU University Centre, a City of Winnipeg spokesperson said.

No injuries were reported, the spokesperson said.

The fire shattered nearby office windows. Part of the building was scorched and some office chairs were also charred before the fire was put out around 1:30 p.m.

In a tweet, the university described the damage as “considerable.”

At 12:50 there was a fire outside UMSU University Centre and it has been put out. Thankfully there are no reported injuries but the building sustained considerable damage.