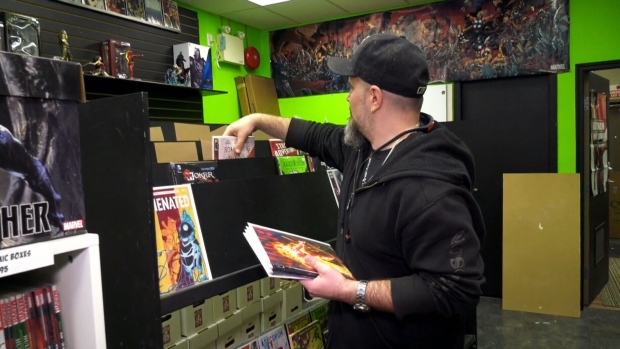 TORONTO — As non-essential businesses across the country close their doors during the COVID-19 pandemic, some long-standing operations won’t be able to reopen when things get better.

In Toronto, Vesuvio Pizzeria and Spaghetti House has been in operation since 1957 and was able to survive through some of the toughest times, but announced on Tuesday that it will close permanently later this week.

“I think that everybody’s feeling a bit how we are feeling: heartbroken. And, well, it hurts,” owner Paola Pugliese told CTV News.

Since the announcement, however, the Junction neighbourhood pizzeria has been flooded with orders, leading to a reported line up of more than an hour outside the restaurant on Wednesday.

In Aldergrove, B.C., Emerald Phoenix Comics announced on April 4 that it could no longer make rent and would be forced to close its doors permanently.

Chris Bodnar, the comic book store’s owner, said his landlord offered to defer half of this month’s rent, but he still won’t be able to keep the business afloat.

“If I can’t make rent this month, having lost a couple of weeks, I can’t say that I’ll be able to make rent plus next week,” he said.

In Halifax, Najib Faris, the owner Mabata Fine Dining, had been planning to expand, but is now considering a permanent closure of his restaurant.

“As a new business, we don’t have the cushioning (or) cash flow to sustain for tough times like these, we’ve only been in business for 14 months,” he said.

Faris said the drop in sales forced him to donate thousands of dollars’ worth of food that would’ve been left to rot.

Pugliese, Bodnar and Faris aren’t the only small-business owners struggling to make ends meet during these unprecedented times.

A survey of 10,969 Canadian small businesses from the Canadian Federation of Independent Business, released Wednesday, indicates about 22 per cent of small businesses have had their revenue drop to $0 during the pandemic, while only half are confident their business will survive to the end of May under the current conditions.

“The risk of otherwise healthy businesses failing is getting worse by the day as bills are piling up with little or no revenue coming in,” Laura Jones, CFIB’s executive vice-president, said in a news release.

Jones is hoping provincial governments set up hardship grants of up to $5,000 for each month that a business is closed due to COVID-19 and for a 25-per-cent reduction in annual property taxes.

“Small businesses take no joy in asking for government help but we are in extraordinary circumstances,” Jones said. “Without more lifelines, too many otherwise healthy businesses will be left drowning in debt.”

Saskatchewan and Nova Scotia already offer hardship grants to struggling businesses, by they are just one-time payments of up to $5,000 and are based on 15 per cent of a business’s monthly revenue.

The Canada Emergency Wage Subsidy offers a 75-per-cent wage subsidy for up to 12 weeks for businesses of all sizes that lost either:

Additionally, under the Business Credit Availability Program, eight of Canada’s top banks offer $40,000 loans that are interest-free for the first year, 25 per cent of which will be forgiven if it can be paid off by the end of 2022.

Still, Jim Cormier, director of the Retail Council of Canada’s Atlantic chapter, said COVID-19 could continue to claim businesses even after restrictions are lifted.

“There are some retailers that won’t be able to rebound from this,” he said. “You’ll then be dealing with, potentially, slower sales as society is getting up and running again and maybe months’ worth of payments that are now due.”