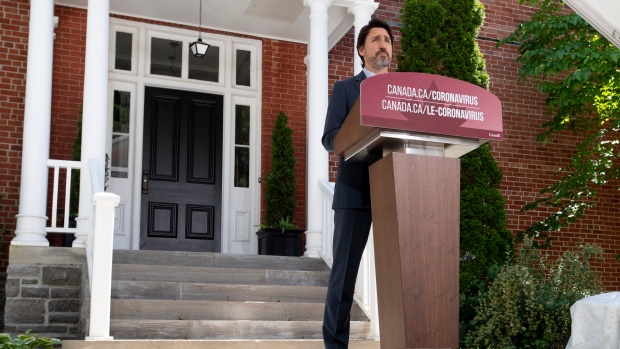 OTTAWA — Prime Minister Justin Trudeau has announced that the federal government will begin testing a “completely voluntary” mobile contact tracing app that can be used nationwide. The app will compile confirmed positive COVID-19 cases and notify Canadians when they’ve been in proximity to someone who has the virus.

“I want to stress that this will be completely voluntary. It will be up to individual Canadians to decide whether to download the app or not. But the app will be most effective when as many people as possible have it,” Trudeau said.

The prime minister said that the Canadian Digital Service —a federal body—will work with Shopify, Blackberry and the Government of Ontario on the new software.

Ontario Premier Doug Ford will have more to say about how the app will work during a press conference Thursday afternoon.

“I want to thank him and his government for their leadership and partnership,” Trudeau said.

Trudeau said there are other provinces, including British Columbia, that are working with the federal government on the app, but it will be available to everyone in the coming weeks.

The plan with the app is to have a health-care professional help Canadians who test positive upload their status anonymously into the national network.

Then, other users who have the app will be alerted if they have been exposed to someone who has tested positive, encouraging them to reach out to their local public health agency.

ONE APP ACROSS CANADA?

The federal government’s intent was to come out with a single contact tracing app that would be “recommended strongly” to be used across the country, but as Health Minister Patty Hajdu signalled earlier this month, that plan has faced pushback from some provinces that preferred to conduct contact-tracing “the old-fashioned way,” or who had already launched their own digital tracing methods.

The traditional contact tracing currently being done involves people making calls for various public health agencies to help track down anyone who may have come into contact with confirmed COVID-19 cases.

If all provinces don’t sign on or endorse the app, Canada could end up with a patchwork of applications being used across the country and, as a result, limited efficacy when it comes to interprovincial spread.

Another aspect contributing to some unease around the idea of a contact tracing app are outstanding questions about app security and the adequacy of current privacy laws to protect Canadians should a breach occur.

Trudeau said Thursday that “the privacy of Canadians will be fully respected.”

In May, Privacy Commissioner Daniel Therrien issued a joint statement with provincial and territorial privacy commissioners, calling for governments to ensure that any applications being developed or recommended respect Canadian privacy laws.

Among the privacy watchdog’s recommendations: ensuring the app was voluntary; its scope and ability to monitor users’ behaviour must be science-based; the data collected is de-identified as much as possible; and that it is subject to independent oversight.

“At no time will personal information be collected or shared, and no location services will be used,” Trudeau said.

Thursday marks 100 days since the World Health Organization declared COVID-19 a pandemic, this morning Canada officially recorded more than 100,000 cases of COVID-19, as provinces continue to ramp up testing to understand accurate levels of infection in the country. Officials in Canada have performed nearly 2,255,000 tests as of June 17.