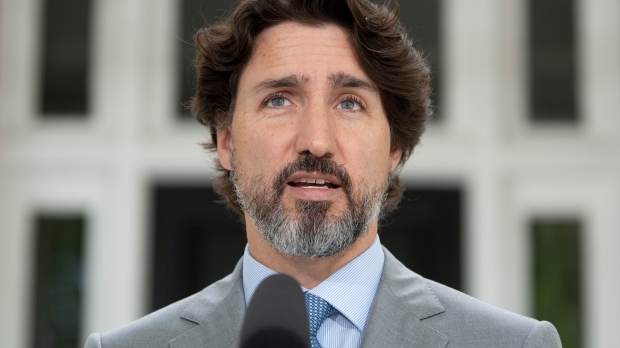 OTTAWA — Prime Minister Justin Trudeau says the federal government is looking at extending the Canada Emergency Response Benefit, and is promising an update by the end of the week.

By the first week of July and through the summer, millions of Canadians will come to the end of their 16-week eligibility period to claim CERB, which has prompted questions about what will happen to those who have been on the program since it first launched and have already accessed the full $8,000 available, but are still out of a job and without income due to COVID-19.

The prime minister announced on Monday that because so many are still struggling, the government is “working on a solution to extend the benefit for people who can’t return to work yet.”

“If you’re having trouble finding a job, you shouldn’t also be worrying about whether you’ll hit the limit of your CERB benefits,” Trudeau said.

The first application period opened in early April, and Canadians are able to claim the benefit for a maximum of 16 weeks between March 15 and October 3, meaning there will still be Canadians receiving funding for weeks to come, but others are soon going to run out.

Close to 1.2 million Canadians have dropped off the program before maxing out their 16-week eligibility, meaning they have either gone back to work or have been moved onto the wage subsidy program through their employer.

As of June 4, the federal government has spent a total of $43.5 billion sending more than 8.4 million Canadians the $2,000 monthly payments. An extension—as the NDP have called for— would amount to approximately $17 billion each month the program remains in place under the current parameters.

“Whether it’s to cover the bills, to keep people on the payroll, or to make rent on a storefront, many Canadians need a hand right now,” Trudeau said.

From Rideau Cottage, Trudeau also provided an update on the emergency loan program available to businesses, and on the status of the promised program to address the food surplus farmers are experiencing due to the pandemic.

The Canada Emergency Business Account, or CEBA, was first announced in March and opened up for applications in April, as a way for businesses to access government-guaranteed loans to cover the costs of keeping their enterprise afloat during the COVID-19 crisis.

Trudeau announced on Monday that the eligibility has been expanded to include more companies, with the updated application process set to open on Friday.

The program offers $40,000 government-guaranteed loans, interest-free for the first year. If the company can repay the balance of the loan by the end of 2022, up to $10,000 will be forgiven.

Projected as a $25-billion program, not-for-profit organizations are also able to apply through their banks, to help cover their operating costs during a period when their revenues have been “temporarily reduced” due to the economic impacts of COVID-19.

Trudeau announced on Monday that the applications for the surplus food program are now open.

First promised in May, the $50-million program will see the government buy large quantities of surplus products and redistribute them to areas where food insecurity is an issue, to avoid throwing out food and to allow the producers to still be compensated.

Fishers or farmers who can’t sell their harvest can apply and the federal government will send the surplus to northern communities or food banks.

“Farmers will have people to buy their goods, and food will get to the plates of families who wouldn’t have enough otherwise,” Trudeau said.