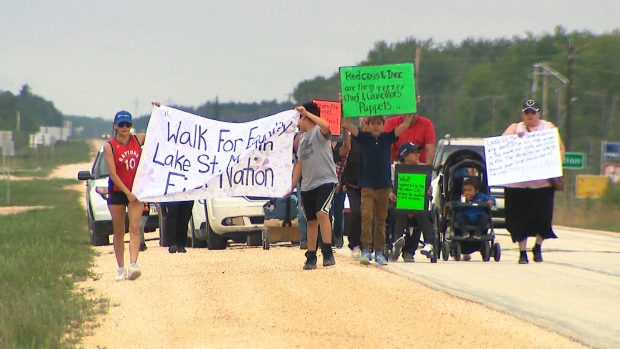 With some people driving and some walking, the convoy moved down Highway 6.

The group said more than three hundred families from the First Nation are still homeless after waiting nine years to return.

In 2011, Lake St. Martin was flooded. A new $200 million First Nation was built with the promise of housing for all displaced residents who were moved to Winnipeg and other Manitoba communities.

The group of protesters said the chief hasn’t connected people with housing if they need it, or the social services required to live off-reserve as they wait.

Some people are taking in homeless family members.

“There’s 14 of us in that four-bedroom house. Three families all together,” said Lillian Catcheway, a 2011 flood evacuee. “You know there are so many homeless people who are still waiting.”

The group is demanding for chief and council to step down and an audit to be done.

Indigenous Services Canada said as of this June, there are still 70 housing units to be completed on Lake St. Martin First Nation.