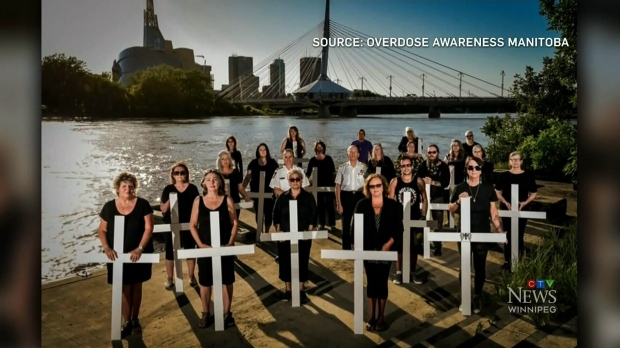 WINNIPEG — People who have lost loved ones to fatal drug poisonings are teaming up to share their stories ahead of Overdose Awareness Month.

Standing in a memorial garden dedicated to those who died from addictions and overdoses, Arlene Last-Kolb remembered her son.

“My son, like all the other children I’ve come to know, deserve better,” she said.

Last-Kolb is a co-chapter leader of Overdose Awareness Manitoba and Moms Stop the Harm. She’s also a strong advocate for the decriminalization of personal drug use.

“Let’s stop telling them they’ve got to stop, and let’s give them a safer supply and then get them help,” said Last-Kolb.

She believes the time to act is now, and that greater pressure needs to be put on people who are against it.

“While everybody continues to talk about it, people are dying,” Last-Kolb said.

Last week, 23 people, mostly family members of people who died from drug poisoning, gathered for a photo near the Red River to raise awareness.

“It shows that it can happen to you,” said Last-Kolb. “It happens to everybody, and these loved ones are so much more than how they passed.”

Last-Kolb said the premier was purposely not invited for the photo.

The photo will be displayed on a billboard for four weeks in August as a part of the purple ribbon campaign which launches next month.

“People are dying every day, and we will not let our children be forgotten,” said Last-Kolb.