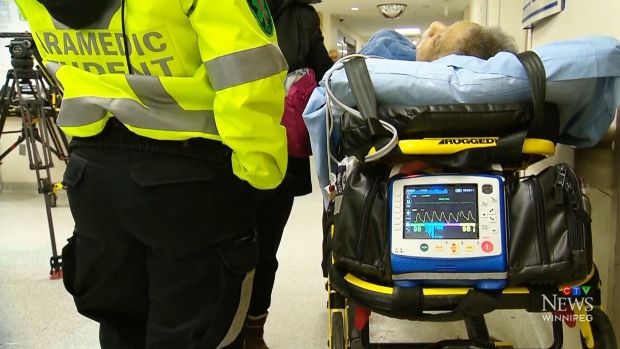 WINNIPEG — Ever since some emergency rooms in Winnipeg became urgent care centres, it appears ambulances are spending more time being redirected.

“I’m not surprised,” said Darlene Jackson, president of the Manitoba Nurses Union (MNU). “That’s certainly something we’ve been hearing from nurses in the three emergency departments in Winnipeg.”

The MNU obtained numbers through freedom of information requests for monthly ambulance diversion records dating back to 2015 for two of the city’s biggest hospitals. It said it wanted to see how they’ve fared since the ER consolidation took effect in the Winnipeg Regional Health Authority, and see what the numbers were like prior.

The data shows from January to September of this year, Health Sciences Centre requested 1,242 ambulance redirects. That number is higher than the last two years; however it comes close to the yearly total for 2016, when HSC made 1,292 requests.

The MNU said with three months of data yet to be tracked, HSC is on pace to beat the 2016 number.

Meantime, St. Boniface Hospital has already surpassed previous years in the first nine months of 2019. Nearly double the requests were made so far this year compared to the last four.

The numbers show St. Boniface made 300 requests for ambulance redirection from January to September of this year. Last year, for the entire year, 158 such requests were made.

“When you get a large influx of patients into the emergency department, there’s no flex in the system. There’s no capacity, so wait times go up, patients wait longer, and then what happens is the facility requests a diversion, because they’re at a point where they are saturated,” said Jackson. “They cannot deal with one more patient, so they ask for a diversion.”

“When Paramedics provide pre-hospital care, they make their transport decisions based on the hospital that can provide the most appropriate continued care for that patient,” said Rebecca Clifton, administrative director with the Paramedic Association of Manitoba.

“It is extremely frustrating for all paramedics when these hospitals are unable to accept patients,” Clifton said.

The WRHA said every effort is made to minimize how often this happens.

“It’s important to note that during redirection periods, all patients who need EMS will be transported to an emergency department or urgent care centre for care. No patients are ‘turned away’ – they are simply brought to a different hospital within the city,” said Krista Williams, chief nursing officer and chief health operations officer with the WRHA.

Williams said the WRHA redefined protocols early last month when it noticed there had been an upturn in redirections.

“Our preliminary data for the month of October indicates significant improvement with respect to ambulance redirections when compared with previous months, and as such we believe the updated destination protocols are having the intended effect,” said Williams.

She said the exact driving forces behind the increase earlier this year are still being examined. She added two working groups have been struck to focus on a nursing workforce strategy, and on improving patient flow, and said they anticipate these efforts should have a positive effect on operations resulting in the number of ambulance redirections needed being reduced.

“As they say, you can’t unbake the bread. The consolidations have happened. The transformation has happened,” said Jackson. “We are now sort of sorting through what’s left of it and trying to solve those problems.”

Clifton also noted increased public education is needed so the public knows when to call an ambulance, when to go to an emergency room, and when there are alternate resources better suited for their needs.