Home  »  News   »   ‘Everything is flooded’: State of emergency in RM of Stuartburn due to flooding 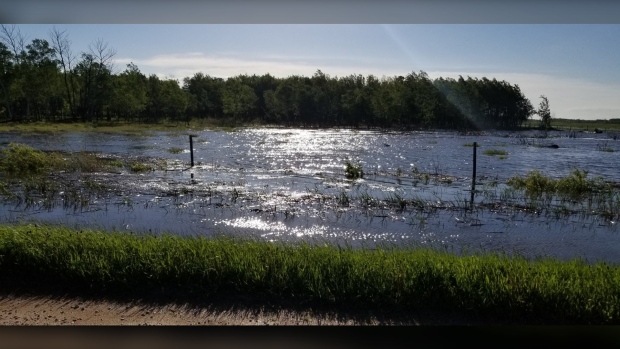 WINNIPEG — The Rural Municipality of Stuartburn has declared a state of emergency due to overland flooding in the area.

“Everything is flooded,” said David Kiansky, Reeve of Stuartburn. “It’s a disaster here in this area.”
The state of emergency, issued Monday afternoon, comes as a result of flooding from recent rainfall in the area this weekend.

“It’s just pouring out of control. I’ve never seen anything like this, and I’m 66-years of age,” said Kiansky.

Kiansky said more than 10 inches has fallen and that the rain was still coming down as of Monday night.

“We will have a serious problem with flooding. We’ve lost so many roads, and now this is continuing,” he said. “There’s got to be people stranded.”

Kiansky is advising people in the RM to stay home or be very careful when driving.

He is also worried about the financial impact the flooding will have on the municipality.

“Every farm, all the crops will be destroyed,” said Kiansky. “It’s a serious situation here in the southeast.”

He hopes that the provincial government will help with relief efforts and funding once the rain finally stops.

The RM of Stuartburn is located in southeastern Manitoba, and includes the communities of Vita, Caliento, and Sundown.

The Manitoba government announced a flood watch Monday afternoon for northwest and southeast Manitoba, including the Whiteshell lakes area.

The province said another system moving toward the province could bring an additional 30 millimetres of precipitation in the areas over the next 48 hours.

The province said the precipitation could cause some localized overland flooding in low-lying areas.