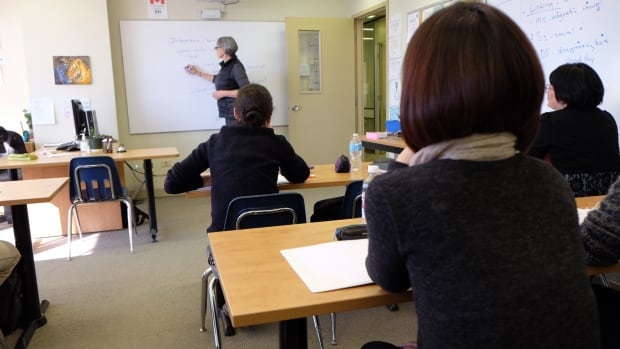 Numerous volunteers and a handful of community organizations have banded together so newcomers in Manitoba can have better access to COVID-19 back-to-school information.

The Ethnocultural Council of Manitoba, with help from four other ethnocultural community groups and the Winnipeg School Division, translated the province’s Restoring Safe Schools plan into six different languages.

The information is presented in videos and information sheets to help newcomers who don’t speak English, or are still learning the language, understand the public health guidelines for schools in a language they know.

“People are isolated. This is a tough time in so many ways to families. Going back to school is also very tough, because there are no resources for other communities that are lacking the language,” Reuben Garang, event organizer of the Ethnocultural Council of Manitoba, said at a news conference Friday morning.

“It’s the time for us to support each other and work co-operatively,” Garang said, and he hopes there will be similar collaboration as the pandemic continues.

The resources announced Friday are presented in Arabic, Filipino, Hindi, Nepali, Swahili and Tigrigna, but there is capacity for more languages, said Kathleen Vyrauen, chair of the Newcomer Education Coalition and settlement co-ordinator for Immigration Partnership Winnipeg.

The project has been in the works since the beginning of the pandemic because community organizations recognized there was a need for translated public health information in the newcomer community, said Vyrauen. But most of the actual translating was done over the three weeks leading up to Sept. 8.

“This information is consistently changing. There’s a lot of information coming out, and for the most part, our government has only been releasing that information in English,” she said.

CBC News has asked provincial officials whether there are translations of COVID-19 information available.

Interpreters from the Ethnocultural Council of Manitoba started translating information for videos. Then the Winnipeg School Division heard about the initiative, and offered the services of its international support workers to translate back-to-school information, Vyrauen said.

Vyrauen hopes other school divisions, both in and outside of Winnipeg, will also join the initiative.

The hope is that they shine a light on the significance of translated information, and that the provincial government will recognize that and partner with ethnocultural community organizations in the future, she said.

The translated videos created by the Ethnocultural Council of Manitoba were officially unveiled Friday, but originally posted earlier this week. In less than two days, the videos were viewed more than 10,000 times, Garang said.