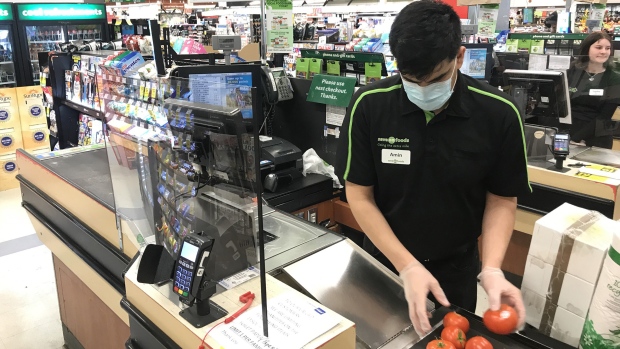 WINNIPEG — Essential workers providing crucial services during the COVID-19 pandemic are still waiting for their “hero pay” from the province, more than a month after the deadline to apply.

The Manitoba government announced the $120 million Risk Recognition Program last spring, to top up wages for workers in the public and private sector, like grocery store employees, security guards and hotel receptionists.

The province extended the deadline to apply to June 29 and widened the parameters to include those who made $5,000 or less a month and worked at least 200 hours between March 20 and May 29.

On Tuesday, the province said 90,000 Manitobans have applied for the program. It will be divided equally which works out to around $1,300 per person. But six weeks after the June 29 deadline to apply, applicants haven’t received a dime.

“The finance department is working hard to review more than 90,000 applications received,” said government spokesperson Andrea Slobodian on Tuesday. “The review process needs to be fully complete before Finance deposits any funds – it needs an exact count since the amount will be divided equally between eligible recipients.”

Jeff Traeger, president of United Food and Commercial Workers Canada Local 832, said around 9,000 of the union’s members have applied. Traeger, who sat on an advisory committee on how the money should be rolled out, said workers have been left in the dark.

“Our members are growing more and more frustrated with the lack of communication and the lack of getting any of the risk recognition in their hands.”

Slobodian said the province is working to deposit the cheques “as soon as possible” and expects to have an update in the coming days.