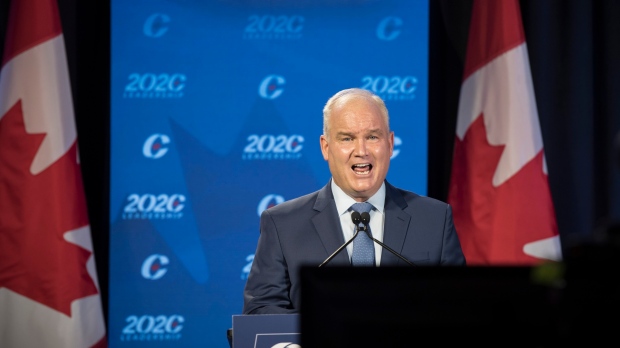 OTTAWA — Erin O’Toole is the new leader of the Conservative Party of Canada, securing victory on the third ballot after a historic and months-long leadership campaign.

O’Toole, an MP from Ontario, defeated Peter MacKay, rising to victory after picking up down-ballot support from Leslyn Lewis and Derek Sloan supporters

MacKay was narrowly leading after the first ballot but he finished the race in second, while Lewis came in third with a strong showing, and Sloan finished fourth and was the first to drop off the ballot. His down-ballot support was reallocated to the remaining candidates but was not enough to decide the race.

That prompted the third-ballot round where O’Toole picked up considerable support from Lewis supporters.

While MacKay was narrowly leading after the first ballot, which saw Sloan drop off the ballot and his points reallocated, by the second ballot O’Toole picked up ground from Lewis supporters.

The announcement of the federal political party’s new leader got underway at 12:20 a.m. ET Monday, after hours of delays due to thousands of ballots being damaged during the counting process.

O’Toole is now being given a chance to spell out his vision for the future and direction of the party, taking the stage to give his first speech as the new leader, hours later than anticipated.

The first ballot results were:

The second ballot results were:

The third ballot results were: