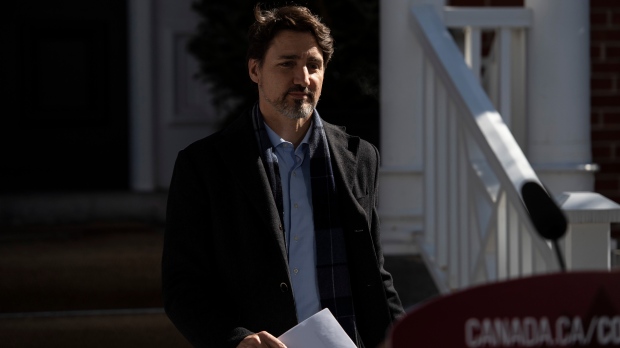 OTTAWA — Prime Minister Justin Trudeau is rolling out new measures to mobilize the Canadian science sector in its development of a COVID-19 vaccine and to assist farmers impacted by the pandemic. He also offered a scathing rebuke for those who aren’t heeding public health advice to keep a safe physical distance between themselves and others.

Monday morning Trudeau announced the federal government will spend $192 million on the development and production of vaccines and treatments for COVID-19. The money is being made available to Canadian research and life-science companies and educational bodies across the country, including some who focus on antibody discovery and plant-based vaccines.

“We’re investing in a long-term solution to COVID-19,” Trudeau said, noting that a vaccine will take months to develop and test. “Once there are promising options, Canada needs the capacity to mass produce treatments as quickly as possible.”

The government has also put a call out to Canadian universities, colleges and polytechnic institutions to play a role as well.

The prime minister also presented new measures to support farmers and agri-food businesses that are facing financial impacts of the pandemic. This includes $5 billion in lending capacity for producers, agribusinesses and food processor and a six month extension on loan repayments, set to cost $173 million in deferred loans to keep the money in farmers’ pockets.

“I know these are hard times,” Trudeau said to the farming community, offering a thank you to those in the food sector who are keeping Canadians fed at this time of crisis.

The prime minister’s remarks from outside Rideau Cottage came as Canadians settle into another week of what experts say could be months of physical distancing measures.

Trudeau said that the physical distancing measures may be taking a toll but they cannot stop.

“It means keeping two metres between yourself and someone else. It means avoiding groups. It means staying home as much as possible. If you choose to ignore that advice you’re not just putting yourself at risk, you’re putting others at risk,” Trudeau said. “Enough is enough. Go home and stay home. This is what we all need to be doing and we’re going to make sure this happens.”

Trudeau will be speaking with all premiers Monday evening—many of whom have now declared provincial states of emergency.

Trudeau said on the agenda for that call will be their collective quarantine and self-isolation measures.

Following the prime minister’s remarks, Deputy Prime Minister Chrystia Freeland is joining other officials to provide an update on the COVID-19 efforts, after leading a meeting of the special cabinet committee focused on the federal response to the novel coronavirus.

Over the weekend public health and government officials expressed increasing alarm at the crowds seen gathering in public places such as parks and beaches, prompting the following urging from Health Minister Patty Hajdu: “Our freedoms around the measures that we’re taking right now depend on people taking them seriously… So I would encourage Canadians to think about that and to think about their obligation to act collectively right now.”

Hajdu was referencing the federal government’s ability to drastically eliminate Canadians’ ability to move freely, through powers they could enact under both the Emergencies Act and the Quarantine Act.

So far the federal government has not chosen to take such draconian measures, but if it becomes clear that provincial and municipal efforts to restrict movement are not effective, Trudeau re-emphasized on Monday that it’s a step they will take.

Trudeau said he knows people who are following guidance are frustrated by those who aren’t, and everyone needs to “do their part.”

Referencing the new cross-Canada federal advertising campaigns being rolled out, the prime minister said that they will reach everyone and there is no excuse to not heed the advice of public health officials.

“Listening is your duty and staying home is your way to serve,” Trudeau said.

These measures are the first in what the government says will be more to come, with the Conference Board of Canada forecasting that the global outbreak could result in the loss of over 330,000 jobs in Canada, should the public health measures remain in place for several months.