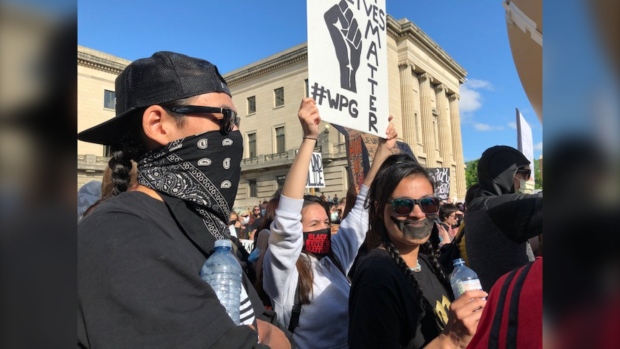 WINNIPEG — Hundreds gathered in Winnipeg for the Justice 4 Black Lives rally demanding change and an end to racism in the wake of the killing of George Floyd.

The rally began with a moment of silence in memory of George Floyd, a man who died in Minneapolis while in police custody.

“I can’t breathe,” those at the rally chanted, the words George Floyd said as a police officer pressed his knee into Floyd’s neck before he died.

“Enough is enough,” Uzoma Asagwara, MLA for Union Station shouted. “Racism does not rest, and as Black people, we understand that racism doesn’t rest. We don’t get to rest.”

Asagwara encouraged those in attendance to take the energy at the event and demand change to what Asagwara said is a “culture of racism” against Black people in Canada.

Asagwara told the crowd to demand change from politicians and decision-makers.

“We should never have to rally like this again,” they said. “I know that collectively we can make Manitoba and beyond Manitoba a place where equity – and I mean real equity exists, and that will mean digging deep.”

They said Manitobans will need to be vulnerable, but it will be worth it.

“It will also result in the next generation not having nightmares.”