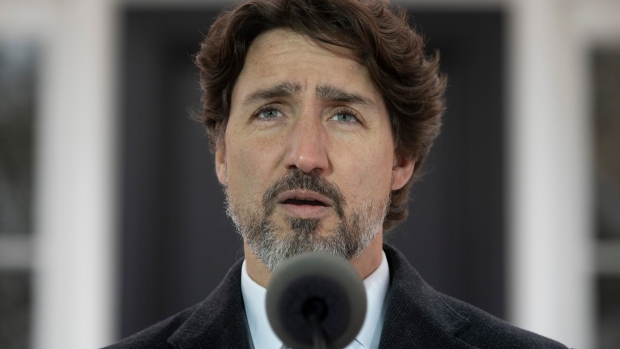 OTTAWA — Prime Minister Justin Trudeau says that the emergency wage subsidy program is being extended beyond June, in an effort to encourage more employers to re-hire staff and “help kick-start” the gradual economic reopening amid “tough times.”

The extension of this COVID-19 aid program comes in light of record-high job losses, which Trudeau said are a “difficult” reminder of how many people need financial assistance.

Since March the Canadian economy has about lost three million jobs, according to Statistics Canada, while millions of other Canadians have seen their incomes drastically reduced as a result of nearly all non-essential businesses being closed.

Employers have applied for the 75 per cent subsidy for more than 2 million workers since it launched last week, Trudeau said. The first payments were expected to be received by businesses this week.

The subsidy is on the first $58,700 of an employee’s salary, providing up to $847 a week per employee and, as it was implemented, it was set to be in place for 12 weeks, retroactive to March 15, for businesses and charities.

The subsidy was implemented to incentivize employers to keep staff on the payroll, and the prime minister said that more details on how much longer employers will be able to claim the federal funding will be unveiled next week. He encouraged businesses that have laid off workers due to the pandemic, to rehire them with the help of this funding.

This extension comes amid questions about whether Canadians and companies would be on their own when many of the current federal aid programs are set to expire next month, even though the current pace of gradual economic reopening indicates many Canadians won’t be back to work by then.

The prime minister has called the $73 billion wage subsidy the largest economic program in Canadian history, and it is a major part of the more than $150 billion in assistance the federal government has enacted in the last two months.

“Right now, Canadians are hurting because of this pandemic. Everyone has their own story, but it all boils down to a very difficult time for a lot of people,” Trudeau said.

The other key element is the Canada Emergency Response Benefit (CERB), which is providing out-of-work Canadians a financial tie-over of $2,000 a month. At least 7.7 million people have applied for it.

“As provinces and territories start to gradually reopen over the coming months, and the CERB becomes less and less needed, this subsidy will play an even greater role,” Trudeau said Friday.

Further, more than half a million businesses have each accessed up to $40,000 in government-backed loans through the Canada Emergency Business Account, to cover the costs of keeping their businesses afloat during the COVID-19 crisis. If companies can repay the balance of the loan by the end of 2022, up to $10,000 will be forgiven.

Reacting to the “staggering” April jobs numbers, the Canadian Chamber of Commerce said the unemployment rate could have been even higher if businesses hadn’t found ways to adapt their business models, such as offering virtual or delivery services.

“The key question is how quickly businesses can or will re-hire once the economy reopens,” said Canadian Chamber of Commerce President Perrin Beatty in a statement.

Trudeau said the government intends to make further adjustments to its federal aid plans “so that help gets to as many workers, small businesses, families, and young people as possible,” Trudeau said.

One demographic that Trudeau continues to promise aid for is seniors, which he says is coming “very soon.”

The federal government is also launching a new panel of experts and stakeholders to do a deep dive into how the pandemic is impacting specific sectors, Trudeau said.

Led by Industry Minister Navdeep Bains, the advisory panel will be looking into the scope of the impact on various industries to better inform the way the federal government responds. While some initial sectoral assistance has been offered to some, including those in the farming and energy fields, more is expected.

This new panel will be meeting regularly over the next 90 days, the government says, indicating a deeper economic bailout could still be months away.

“No sector is untouched, no province is untouched, no community is untouched by this,” Employment Minister Carla Qualtrough said in an interview on CTV News Channel on Friday, reacting to the latest figures. She said the government is anticipating the May job numbers, to see how many Canadians are back on the job through the wage subsidy.

“We’re talking about what the next phase of support will look like,” she said.