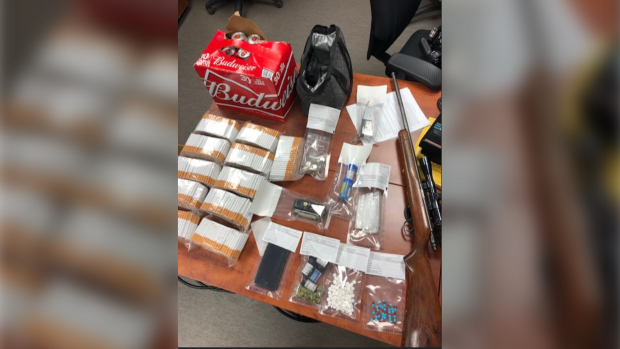 WINNIPEG — Russell RCMP is investigating after five people were arrested in a traffic stop on April 25.

Around 1:40 a.m. officers stopped a vehicle on Highway 41 about three kilometres south of Highway 16 in the Rural Municipality of Ellice-Archie.

RCMP said when officers approached the vehicle they found five people inside and spoke to the driver, a 32-year-old man from the Birdtail Sioux First Nation.

The man told officers he didn’t have a driver’s license and a further check by officers revealed he also was prohibited from driving.

RCMP said the man was arrested for impaired driving and he had a blood alcohol concentration over 1.5 times the legal limit.

The driver is facing several charges including, impaired operation of a motor vehicle, driving while prohibited, possession for the purpose of trafficking, three firearms offences, open liquor and possessing unstamped tobacco.

The four passengers are also facing charges of possession for the purpose of trafficking, possession of a firearm in a motor vehicle, and possessing unstamped tobacco.

RCMP said all five people were released on conditions for a court appearance which is scheduled for Sept. 23, 2020, in Russell, Man.

The charges against the five have not been proven in court.