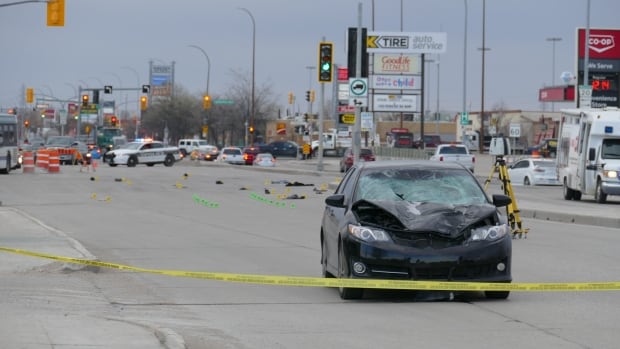 Police have arrested and charged a 34-year-old man who allegedly hit and killed two people with his car last May.

The collision happened on May 14, 2019, just after midnight near the intersection of Panet Road and Nairn Avenue.

Police say they believe the vehicle was travelling westbound on Regent Avenue West, when the pedestrians, a man and a woman, crossed southbound at Panet Road.

The two pedestrians suffered significant injuries from the collision and were taken to hospital in critical condition, where they were later pronounced dead.

The driver remained on scene and met with officers.

Witnesses to the crash said they watched in shock as it happened, saying the car had the green light at the time. They said there was another person with them, who started to run across the street when they noticed the car was approaching, but the other two were casually walking.

“I saw these three people, and I was thinking, ‘Don’t cross the street.’ It was the vehicle’s right of way,” Astra Derksen told CBC News last May.

“They looked like they weren’t aware of their surroundings.”

She said she wasn’t sure if the pedestrians saw the car as it approached them, or if the driver noticed them.