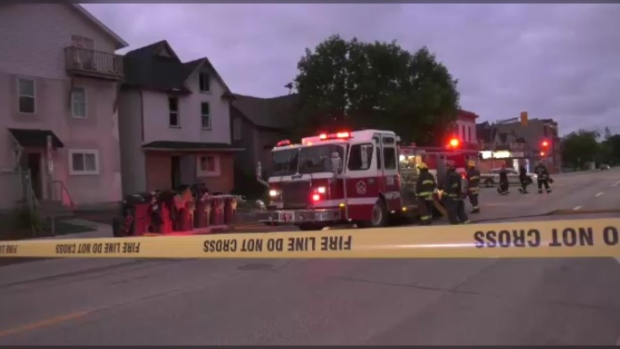 According to Winnipeg police, their helicopter – AIR1 – was on a routine patrol around 2:50 a.m. when it spotted the fire in the 500 block of William Avenue.

The building was engulfed in flames and there were people outside trying to alert other residents in the home.

The fire was not yet reported, so AIR1’s flight crew called for firefighters and more police resources.

Officers arrived and began to use fire extinguishers to clear the flames and search for anyone trapped in the home. Police helped six people get out of the building safely.

When fire crews got to the scene, they found thick smoke and flames coming from the home, and attacked the fire from inside the buildings people.

Firefighters were able to extinguish the fire by 4:10 a.m. and no one was hurt.

Some of the neighbouring homes were evacuated as a precaution, but those residents were able to go back into their houses after fire crews were done on the scene.

“If we’re wondering why this is a help to us to have AIR1, it certainly aids our ability to assess the condition of the fire,” he said.

“A timely report, as you can see, seconds count, so if we have knowledge that the structure’s well-involved in all parts of it, or certain parts of it, that assists our incident commanders in being able to formulate their incident action plan, and would help dictate what actions we would take.”

He said it’s not uncommon for police to be the first ones on the scene of a fire, as the general patrol units are out on the streets at night when there are fewer people to report incidents.

“This could have been much more serious and tragic, had it not been noted that soon, because it could’ve encompassed neighbouring properties,” Holowczynsky said.