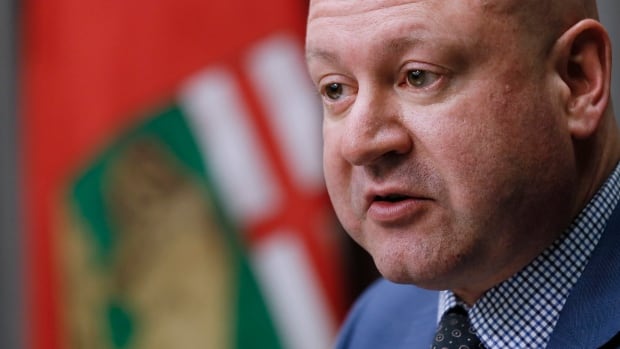 Manitoba’s chief public health officer will give an update on COVID-19 in the province Sunday afternoon.

As of Friday, Roussin said 34 cases were linked to the Brandon cluster. Those cases are tied to a person who returned to Manitoba from eastern Canada and did not properly self-isolate, he said, though it’s not likely health officials will be able to pinpoint the precise source of the outbreak.

Manitoba’s five-day rolling test positivity rate jumped to 1.23 per cent on Saturday, from 1.1 per cent the day before.

As of Saturday, there were nine people with COVID-19 in hospital in the province. Three of them were in intensive care.

The most recent death linked to the illness in Manitoba happened on July 22, bringing the total number of COVID-19-related fatalities in the province to eight.

One of the province’s latest COVID-19 cases is a worker at E.G. Penner Building Centres in Steinbach, the store said in a statement on Saturday.

The employee, who did not work in the retail part of the store, is now self-isolating, the statement said. Anyone who has been in direct contact with them is advised to self-isolate for 14 days.

All store areas and company equipment that the sick employee had contact with have been sanitized and disinfected, the statement said.

Meanwhile, a McDonald’s restaurant in Brandon shut down on Saturday after a worker there was presumed positive for COVID-19.

The employee at 2626 Victoria Avenue reported it late that night, McDonald’s Canada said in a statement. The person had last worked at the restaurant on Friday from 6 a.m. to 2 p.m., the statement said.

The restaurant immediately shut down to be cleaned and sanitized. Other staff who may have been in close contact with the worker have been asked to self-isolate until more information is available.