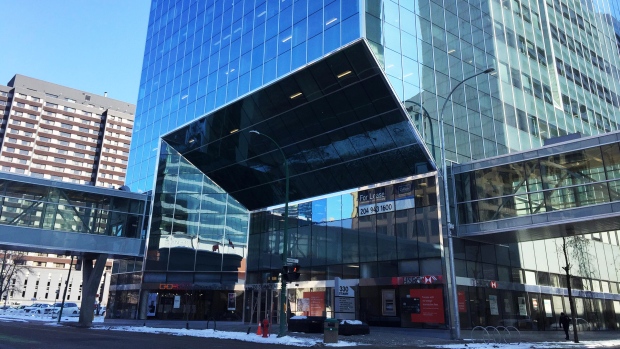 WINNIPEG — An office building in Downtown Winnipeg is in the process of being cleaned, and its occupants are being asked to work from home, after owners say they were notified someone who’s recently been in the building has tested positive for COVID-19 and someone else has a possible case of the virus.

On Monday, Colliers International said one person who tested positive for COVID-19 was in the office building located at 330 St. Mary Ave, as well as another person with a possible case of the virus.

Manitoba Public Health officials neither confirmed nor denied there was a person with a confirmed case of the virus in the building, adding that there have been no cases of community transmission so far.

“We’re a few days into seeing our first case. All of those have been directly related to travel. All of them have been contained as per our plans, so right now I can’t say I expect community transmission at this time,” said Dr. Brent Roussin, the chief provincial health officer.

Roussin said provincial public health officials will not be disclosing the locations where people with confirmed cases have been. Only people who have had prolonged, close contact with an individual with a confirmed case will be notified, Roussin said.

He added if the public needs to know about something – they will be told.

“This is not like, say measles, where anyone in a room would be exposed to that – we’re looking for people who are only close contacts to them,” Roussin said. “If there was an at-risk event that we thought, of course we’ll be trying to contact those people and if we needed to make that public, we’d do it.”

Colliers said both individuals are currently in self-isolation and are providing their reporting supervisors, the property management team, and Colliers’ risk management team regular status updates.

Colliers said the people were on site on Monday, March 9 to Wednesday, March 11, and used all four elevators, the third and seventh floor washrooms, common areas, the main floor, parkade and the tunnel leading to 175 Hargrave Street, as well as Oscar’s Deli.

A sign posted on the deli’s door said it will be closed until further notice.

“Now out of an abundance of caution, we have closed the deli for a minimum of 72 hours. During this time the restaurant has been professionally fogged with a safe organic disinfecting compound,” the deli told CTV News in a written statement.

Colliers said all tenants and vendors in the building have been notified, and an intensive cleaning of all the affected office spaces and communal areas is currently being done. All high-touch point areas are also being cleaned, the company said.

The spokesperson for Colliers said the building at 330 St. Mary Ave will remain open.