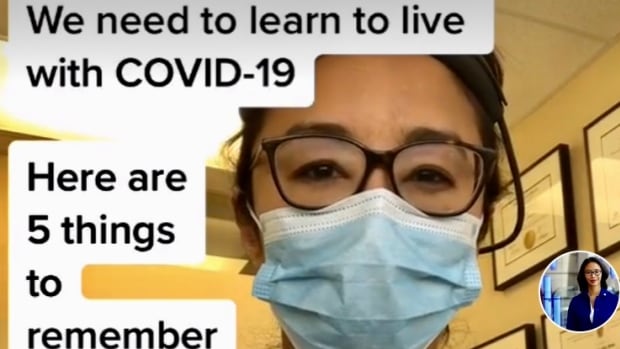 While TikTok is typically used to post videos of people dancing or cute, funny animals, a Winnipeg doctor is using the platform, which is popular among the younger crowd, to educate people about COVID-19 and how they can reduce the spread of the illness.

Dr. Gigi Osler, a surgeon and the past president of the Canadian Medical Association, says she wanted to reach young people who might not read or watch traditional news sources.

“If you look at our cases, a lot of the cases right now are people in their 20s and 30s. You have to find ways to go to where the people are and they’re on social media,” she said.

She posted her first short video to the social media platform in early March, showing people how to properly wash their hands to prevent the spread of COVID-19.

Since then, she’s made dozens more that have reached thousands of people. A recent video about how Winnipeg has become a hot spot for the virus had more than 23,000 views, and nearly 1,500 likes, as of Wednesday night.

Other videos have shown people ways to stay safe and the benefits of wearing a face mask.

Osler says she wanted to educate people about how to stay safe and continue living their lives as the pandemic wages on, without going into another lockdown.

She said she thinks that’s possible to do, if people have the right information.

“I think if we can wrap our minds around that, then we won’t have to go back down into the heavy, restrictive lockdown,” she said.

“So that’s my message that I keep trying to get across, is one of hope. It’s not one of fear. And it’s a message that we can do this by taking a few simple steps.”

Thus far, Osler said the reception to her videos has been mostly positive, though he’s had some anti-maskers or conspiracy theorists push back against her messages.

“So you do get folks who may respond back to say that you’re fear-mongering or spreading false information. But the information that I’m trying to get out is from the public health sources,” she said.

Osler said she tries to keep her videos simple. They usually just show her talking, with text over top.

She said she’s not ready to venture into dancing or lip-synching in her videos just yet.

“I don’t think anybody wants to see that.”