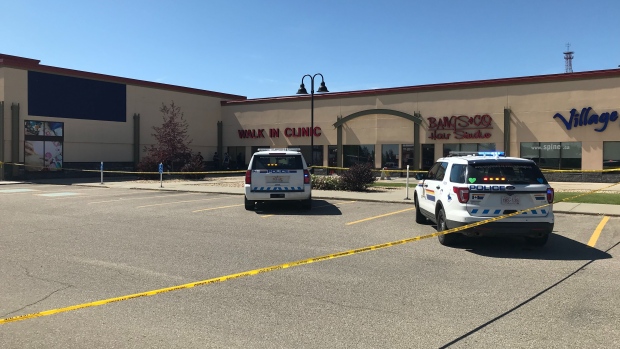 EDMONTON — A doctor is dead after he was attacked at his own clinic in Red Deer on Monday.

It happened shortly before 11 a.m. at the walk-in clinic at the Village Mall. The victim was taken to hospital with life-threatening injuries where he later died.

One person was arrested at the scene, and police confirmed that the attacker had used a weapon.

RCMP Supt. Gerald Grobmeier held a press conference on Monday evening to update members of the public about the investigation.

He wouldn’t confirm any details about the victim or the suspect to protect the investigation, but the Alberta Medical Association has confirmed that the victim was a doctor working at the clinic.

I have just learned of this horrific attack on a Red Deer physician. I can’t express my great sorrow for his family, his colleagues and the Red Deer community. The AMA will be reaching out to local medical staff to learn how we can best provide support at this time. 2/2

Grobmeier was not able to provide details about the attack, but alluded to the fact that the doctor’s death had been violent and traumatic.

“I’m sickened to learn that a member of our community died in such a heartbreaking way,” he said.

“These types of incidents are very, very rare, fortunately, but when they do it sends shock waves through the community.”

He spoke to the trauma that people in the clinic and first responders experienced as a result of the attack.

“It will be probably the worst experience they’ll ever deal with in their life. You can’t describe it; they’ll live with this trauma forever.”

He also spoke of his own experience on scene.

“It’s tough right? You’re concerned about your members, you see your members in tears. It’s not easy.”

Anyone who is experiencing issues as a result of the attack is urged to call victim services at 403-306-2345.

Grobmeier confirmed that the officer who arrested the suspect had been hit with a blunt weapon during the arrest and suffered non-life threatening injuries. Despite that, the officer was able to arrest the suspect without the use of force.

A team of major crimes investigators have been brought in to assist with the investigation.

Charges haven’t been laid as of Monday night, but Grobmeier said he anticipates there will be an update on that front shortly.

“The investigation is moving along very rapidly, and we see a conclusion coming up shortly.”

He also had an important message for the community, that there is no danger to the public.

“You are safe, this was an isolated incident, and there is no concern for your safety.”