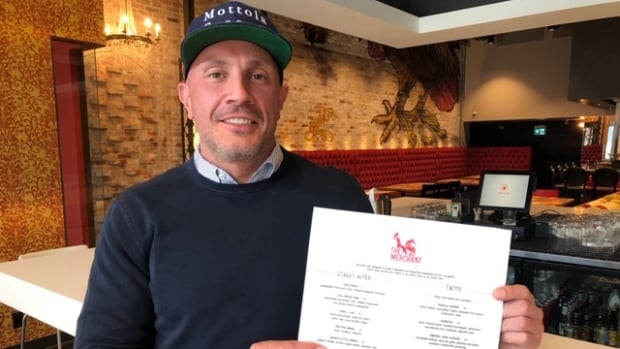 When Browns Socialhouse on Main Street reopened its patio on May 4 and expanded to indoor dining last Monday, one thing didn’t return to the Winnipeg restaurant — cardboard menus covered in plastic.

Instead, customers are now given a disposable paper menu, sent to all of the franchise’s locations from head office.

“It’s just one less thing to disinfect and possibly come into contact with anything,” said manager Jessica Nimchuk.

The regulations under which restaurants in Manitoba can now reopen include a requirement to disinfect reusable items on tables between customers — including things like plastic-covered menus, napkin dispensers or condiment containers.

Nimchuk says at Browns, in addition to rearranging patio furniture and inside tables and chairs to comply with physical distancing and capacity rules, every door handle, soap dispenser, or other item that people can touch, especially in the washrooms, is disinfected every 30 minutes.

Public health rules for restaurants also say tables and chairs have to be cleaned between customers, and buffets and drink refills aren’t allowed.

Over at Merchant Kitchen on Donald Street, Bobby Mottola prepared to reopen Monday — a week after indoor restaurants were allowed to reopen, at half-capacity, on June 1.

Mottola is taking the extra time to fine tune procedures and protocols at his establishments under the Academy Hospitality banner, including Pizzeria Gusto and Hargrave St. Market.

He is taking his cues from the province in terms of encouraging single-use items.

“No communal ketchup or salt and pepper shakers,” for example, he said. “We looked at every aspect of our business.”

We haven’t necessarily been good at finding a routine, but we have been very good at adapting to not having one.– Bobby Mottola

He’s also moved to a recyclable, one-time-use menu — 11 by 17 sheets printed off in house. After they’re used, he says some of the paper menus will end up being fire starters for their wood-burning oven. Others will wind up in the recycling bin.

Mottola isn’t tallying the cost. He describes the shift to one-time-use menus as an abundance of caution, needed to instill confidence for both customers and staff in returning to the “new normal.”

He’s also hoping to have new technology up and running next week which will even further remove physical contact with menus. Customers will be able to sit at a table in the restaurant, order and even pay for what they want from their cellphone.

“We will know where you are, what you have ordered and deliver your food from our kitchen to your table. So at that point, there is even less contact,” said Mottola.

This technology, he said, can be used long after the COVID-19 pandemic is a footnote.

Other restaurants CBC spoke with are continuing with the laminated menus they currently have, with staff wiping them down after each use.

When it comes to the risk of transmission of the coronavirus in restaurants, menus are on the list — but not at the top, says an epidemiologist from the University of Ottawa.

A lot of evidence has been gathered on assessing the risk of transmission in restaurants, particularly in Europe, says Dr. Raywat Deonandan.

Going out for dinner generally appears to be OK, he says, if you are on a patio and well distanced from other diners.

“In situations like that, the vector of transmission will be your server, and the cleanliness of the food and the bathroom facilities,” said Deonandan.

“No shared ketchup bottles or menus, not being moved from table to table … that sort of thing — that’s helpful.”

All the extra work and precautions are worth it to restaurant owners like Mottola. He and his staff are excited to welcome customers back into his premises come Monday.

“It’s an investment — something you got to do to make sure we aren’t doing anything to contribute to the longevity of the lockdown,” he said.

Everything, he says, has been a constant pivot. Every day seems to change slightly in terms of how many people are needed, and where. Today it’s working on new menus. A month from now, it could be something else, says Mottola.

“We haven’t necessarily been good at finding a routine, but we have been very good at adapting to not having one.”