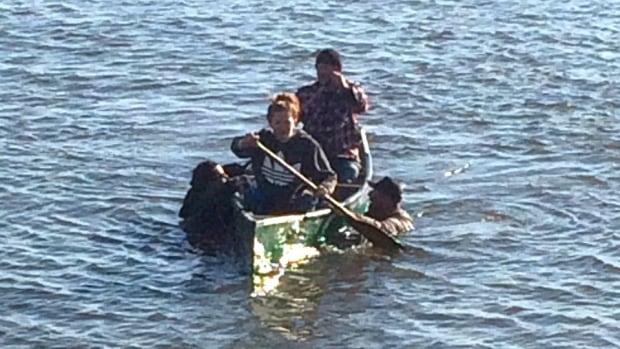 An evening meal at the lake turned into a rescue Monday night when a Manitoba family at Balsam Harbour spotted a boat with three men in it going under.

Susan Skinner and her husband, Ken, were having dinner with their son, Matthew, and his girlfriend when they noticed a boat going back and forth on Lake Winnipeg.

She said she thought it was unusual for such a cold night, when there was still ice on the lake.

When it passed by again, the family noticed the boat was in trouble.

“It was pretty low in the lake and then we said, ‘Oh my God, it’s going under.’ And it did. It went right under,” she said.

The family quickly sprung into action. Ken grabbed a canoe from under their deck while Matthew and his girlfriend, Kaela, grabbed paddles and a life-jacket.

One man from the boat had made it close to the shore, while one was hollering for help. The third man was clinging to something floating the water, Skinner said.

While Ken waded into the water to help the man close to the shore, Matthew and Kaela jumped in the canoe to rescue the other two.

While one of the men grabbed on to one side of the canoe, Susan said it took some convincing to get the other man to take their help.

“The other fella said, ‘No, I’m OK, I’m OK.’ And Matthew just said, ‘No you’re not. Come on the other side and balance the canoe,'” which the man did.

“He was trying to sort of recover some of the stuff that was floating in the water.”

Once the three men got to shore, it was clear they were in bad shape. The family tried to wrap them up in blankets and towels, but one was vomiting so much he couldn’t even make it into the hot shower the family prepared for him, Susan said.

“So much for COVID-19 [distancing precautions]. You know, it just turned into a bit of a zoo,” she said.

Susan said she called 911 and paramedics arrived to take the men for medical attention.

Ken said he was also pretty shaken by the incident.

“After they left, I was pretty emotional. It was just a scary thing to watch,” he said.

This isn’t the first time the family has had to help people out, because of the proximity of their cabin at Balsam Harbour — about 80 kilometres northeast of Winnipeg, on the southeast shore of the lake — to the water, Susan said.

“We’ve had to use our boat on occasion to rescue people who were in trouble and unfortunately often people don’t have the right gear,” she said.

“And you know, it’s a sad thing. And you realize my family put themselves at risk too … so it’s a little frustrating.”

She’s not exactly sure what happened to the boat that caused it to take on water, or whether the boaters had life-jackets with them, she said.

But the trio on Monday were lucky that they were close enough to shore for the family to spot them, Susan said.

“They were so fortunate that they were right in front of us.… If they had been even further south, we wouldn’t have seen them,” she said.

“It could have been a tremendous disaster. It was just lucky for them.”