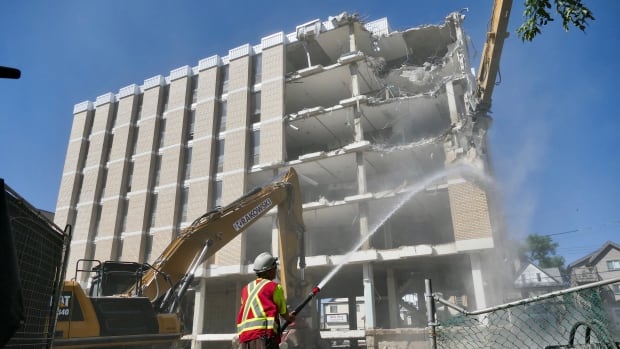 The development will replace the Misericordia Education and Resource Centre, at the corner of Sherbrook Street and Wolseley Avenue. It’s expected to take about two years to complete, according to Caroline DeKeyster, the president and CEO of Misericordia Health Centre.

Once finished, the Misericordia Assisted Living Centre will stand 10 storeys tall and contain 97 suites. The $32-million development will include a second-floor patio, a solarium, a library and a skywalk giving direct access to the hospital.

An excavator begins demolition at the Misericordia Education and Resource Centre Thursday morning. 0:44

“Affordable assisted living housing for older adults is very much needed in our neighbourhood,” DeKeyster said.

A media release from Misericordia cited a 2014 study, which found the MERC building needed significant upgrades to its mechanical, electrical and safety systems. The high cost of addressing the deficiencies convinced the hospital to replace the six-storey building with a new purpose-built facility.

Demolition and cleanup of the site is expected to take up to a month.