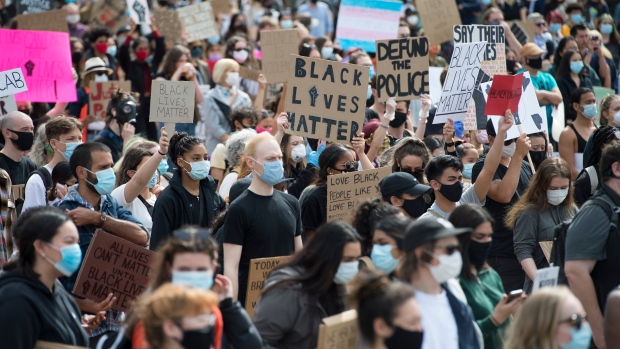 TORONTO — Citing decades of failed reform, Canadian protesters against anti-Black racism have rallied around another mantra for change: “defund the police.”

Instead of tweaking the current system of law enforcement, activists say that a more powerful approach could be a new kind of law enforcement altogether. The start of that change is removing and reallocating massive sums of money provided to police forces in the country, they say, which could help prevent more police-involved deaths like the ones that have spurred ongoing outrage, including Minnesota man George Floyd and Toronto woman Regis Korchinski-Paquet.

More than $15 billion was spent in Canada on policing in 2017-18, according to Statistics Canada, an increase to the year prior.

The push to defund is gaining momentum in some parts of Canada. In Toronto, where almost a quarter of each person’s property taxes go just to funding the police, two city councillors on Monday put forward a motion to cut the city’s police budget by 10 per cent and shift it to “much-needed community supports.”

Thousands have signed petitions in other parts of the country, from Regina, Sask., to Sault Ste. Marie, Ont., for similar reallocations of police funding..

When asked recently if he would consider defunding the RCMP, which receives a large sum of the national policing budget, Prime Minister Justin Trudeau didn’t reject the notion.

“I think there are many different paths toward making a better country. We need to explore the range of them,” he said.

Mental health is an essential piece of the call for defunding since many police-involved deaths in Canada have involved mental health and substance abuse issues, including Korchinski-Paquet’s death, which occurred after police responded to a mental wellness check on May 27. The money, activists say, could go to boosting community support for mental health and creating what Black Lives Matter Toronto co-founder Sandy Hudson called “a new emergency service.”

“People would have the option to call experts who are trained to deal with the health needs and social needs of people who are experiencing a mental health crisis,” she said on CTV’s Question Period Sunday.

“That way, those people maybe don’t show up with lethal force, and that way we can ensure that people get the support that they need from people who are trained to deal with that very particular complex situation.”

It’s a position echoed by Toronto activist Desmond Cole, who told CTV’s Your Morning last week that the current response to a mental health crisis is harmful.

“What we do now is we say ‘Let’s send several burly men with guns who have a licence to kill to go and support somebody who may be in mental health crisis.’ We don’t care about the fact that that person may be terrified about an armed response to their house,” he said.

“We keep insisting that there’s no other way.”

But Cole and other activists insist that there certainly is another way: people who are unarmed and trained in social work with expertise in deescalation tactics and the ability to offer services and support. “That person is obviously a better person to come and respond,” he said.

Will Prosper, a Montreal activist and former RCMP officer, told CTV News on Sunday that a full 10 per cent of his city’s budget goes to the police force, something he believes needs to change.

He said the reality of the Montreal Black community is “being impoverished — whether it’s education, whether it’s arts, culture, whether it’s investments towards a community organization, grassroots movement — so for us it’s not a solution to invest more in the police forces, it’s to find alternatives to the police presence in our neighbourhoods.”

Prosper echoed the call for a new community-based solution to mental health wellness checks. He mentioned that Montreal police had been involved in the deaths of several Black men in mental health crises over the past decade, naming Pierre Coriolan, Alain Magloire and Nicholas Gibbs.

“[They] all had symptoms, or were facing mental distress, and the way that the police intervened, they went so quick, so fast, and they shot and killed those men,” Prosper said.

An independent study released in 2019 and commissioned by the Montreal police department found “systemic bias” in how often Montreal police subjected citizens to racial profiling. The study found that Black people and Indigenous people were over four times more likely to be stopped for a “street check” in Montreal than a white person.

In response to calls for the defunding and even abolishment of police, former Ontario Provincial Police commissioner Chris Lewis said that change needs to happen in a “very methodical way” and that police remain a vital entity in controlling violent crime.

Winnipeg’s Police Chief, Danny Smyth, also responded on Monday to a petition with more than 25,000 signatures calling for the force to be defunded, saying that he believes it’s “too early” to do so.

“If you were to just rip a large segment of the budget all at once, then I think you would be putting our environment into a more volatile place than it is now,” he said, adding that he was open to police reforms.

But reforms have not been working, countered Hudson, citing a lack of evidence to support the oft-touted reform position that body cameras worn by officers can prevent police brutality. Earlier this year, a U.S. researcher who has studied the use of police body cameras told Stateline, an initiative of The Pew Charitable Trusts, that a camera alone, “isn’t going to drastically change how police operate.”

Activists are searching for a new way of policing, some encouraging the idea that police be abolished all together. But that’s not to say that calls for defunding are calls for lawlessness.

“They’re not calling for no law enforcement,” said Keith Mayes, professor of African American studies at the University of Minnesota, on CTV News Channel. “They are trying to say that there may be other ways that we can police and we can engage in public safety in our communities. Maybe not this massive militarized police presence.”

Mayes believes the widespread protests are working. Though thousands still await substantive change, the moves that have come so swiftly already this spring are encouraging, he said, and remind him of something he tells his students:

“Politicians don’t roll out of bed and pass new laws,” he says. “They have to be forced and pressured to do so by the people.”

Already, protests in Minnesota have brought change. On Sunday, nine members of the Minneapolis City Council announced that they intended to dismantle the city’s police force and rebuild with community-focused alternatives.