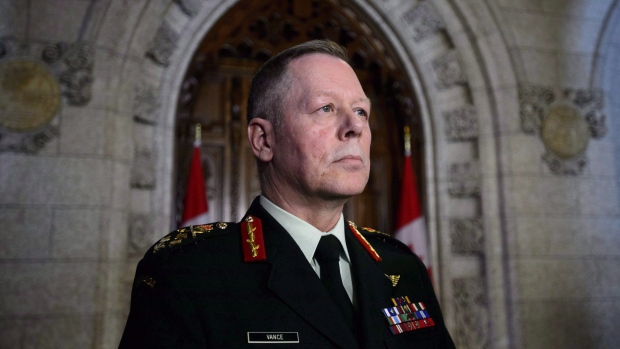 OTTAWA — The Canadian Armed Forces is being put on a war footing as it prepares to be thrown into the COVID-19 crisis.

Chief of the defence staff Gen. Jonathan Vance issued the call to arms in a five-page letter to the troops on Friday, in which he ordered them to stay healthy and be ready to respond immediately if and when the military is called into action because of the pandemic.

“Today, our mission along with the armed defence of Canada is to safeguard our health, safeguard the health of Canadians, and be prepared to respond to calls for assistance,” Vance said in the letter, which was posted to Twitter.

Military commanders are currently preparing “COVID-19 response forces,” Vance said, which includes organizing individual units into task forces that will be able to respond by land, sea or air should their assistance be required.

Recognizing the military could be called upon to help with the pandemic at the same time its assistance will be needed to deal with a flood or other natural disaster, Vance said commanders were working to create similar task forces for those efforts.

To protect the health of the force — and presumably to ensure enough troops are available — operations overseas will be scaled back, Vance added. Those returning to Canada, including 200 troops due back from Ukraine next month, will report for duty after 14 days in quarantine.

The military announced on Thursday that the 200 troops in Ukraine will be replaced by a smaller force of 60 service members to hold the fort until the pandemic passes.

“Details of where and how you will be quarantined will be given to you,” Vance said. “If you have recently returned and are at home, you are under full quarantine at home for 14 days and are not permitted to leave your residence.”

In the meantime, the primary mission for all those at home is to stay healthy so they are ready and able to respond should the need arise.

“For those of you who are isolated at home or in quarters — this is your place of duty and your duty is to prevent the spread by ceasing contact with those outside your home or quarters except for essential shopping for the necessities of life and individual (physical training) outside,” Vance said.

“For those who must report for duty outside your home or quarters, you must do so safely, maintaining physical distance from others and washing your hands often. We are taking these steps to keep the force fit to fight.”

Underscoring the need for healthy bodies, Vance encouraged military personnel in the process of voluntarily leaving the Forces to stay longer as recruitment has ceased because of the pandemic. Those who still want to leave will face delays, he warned.

Vance also urged former service members who might be thinking about rejoining to do so, and said efforts are underway to keep anyone who is leaving for medical reasons and whose transition to civilian life might be in jeopardy, at least until COVID-19 passes.

In the meantime, the usual posting season, which sees thousands of military personnel and their families move from one part of the country to another because of new jobs and responsibilities, is being severely curtailed because of the pandemic.

This report by The Canadian Press was first published March 27, 2020.