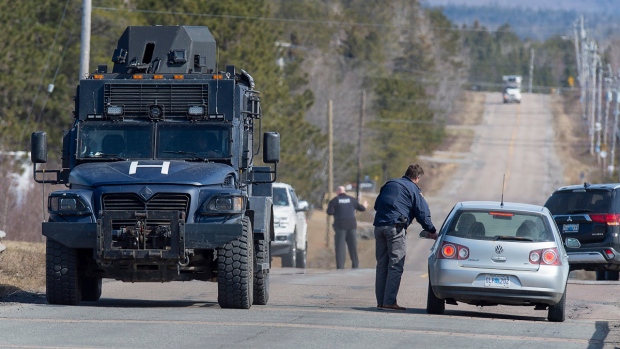 TORONTO — RCMP say at least 19 people, including one of their veteran officers, have been killed in a mass shooting incident in Nova Scotia, making it the worst mass shooting in Canadian history.

But police warn the death toll could rise as investigators unravel the extent of the suspect’s violent path across the province Saturday night and into Sunday.

The shooter, who at one point in his rampage wore a police uniform and drove a car made to look like an RCMP cruiser, is also dead following the incident. He is among the 19 dead.

In a news conference in Dartmouth, N.S. on Sunday, investigators related the enormity of the incident.

“Today is a devastating day for Nova Scotia and it will remain etched in the minds of many for years to come,” said commanding RCMP officer Lee Bergerman.

“Heidi answered the call of duty and lost her life while protecting those she served,” said Bergerman. “Two children have lost their mother and a husband has lost his wife. Parents have lost their daughter and countless others lost an incredible friend and colleague.”

“He and his family will be supported and we will be alongside him as he begins his road to recovery,” said Bergerman.

Premier Stephen McNeil offered condolences to families of the victims and called the incident “one of the most senseless acts of violence in our province’s history.”

The death toll surpasses that of the 14 victims killed in the 1989 Polytechnique massacre in Montreal.

But police are warning their investigation could lead to finding more victims because the suspect travelled across the province in a prolonged attack that appear to be “at least in part, very random in nature,” said RCMP Chief Supt. Chris Leather during a news conference Sunday evening.

Leather said it was hard to specify the exact number of victims, “because as we’re standing here, the investigation continues into areas that we have not yet explored across the province.”

Officers secured the area in Portapique, which is approximately 130 km north of Halifax and 40 km west of Truro, and started searching for the suspect, but they were unable to locate him. Shaken residents of the rural area, already in lockdown because of the pandemic, were told to lock their doors and stay inside.

“The search continued overnight and into the morning,” said Leather. “This morning we actively sought out the suspect through multiple communities throughout Nova Scotia.”

They also revealed that the suspect may have been dressed as an RCMP officer in a lookalike RCMP vehicle.

VICTIMS WERE ‘SCATTERED ACROSS THE PROVINCE’

“There are several locations across the province where persons have been killed.”

He said investigators believe the sole suspect is believed to be responsible for the killings.

“I hear the shots and I look out and … there’s a guy running back-and-forth up beside the, what looks to be a police vehicle,” recalled one witness at the scene. “Then after a short bit I saw fire.”

SUSPECT SHOT AND KILLED IN ENFIELD

Officers eventually tracked Wortman to the Irving gas station and Big Stop restaurant in Enfield, N.S., about 90 kilometres away from Portapique, where he was shot and killed late Sunday morning.

The Nova Scotia Teachers Union issued a statement Sunday that said a teacher at Debert Elementary, Lisa McCully, was among the dead.

She was known by colleagues and students “not only as a passionate teacher but as a shining love in their lives.”

“We know that there are many others who died last night whose families are struggling to process what has happened,” Wozney wrote. “Their lives are no less precious. They are our neighbours and friends. Their children are our students. We hurt with you all too.”

A Gabriel Wortman is listed as a denturist in Dartmouth, according to the Denturist Society of Nova Scotia website. A suspect photo issued by the RCMP matches video footage of a man being interviewed about dentures by CTV Atlantic in 2014.

Some Portapique residents who spoke with the The Canadian Press said they knew him in passing as a part-time resident who divided time between the Halifax area and his properties in the community. Portapique’s population numbers about 100 in the summer months, but swells to about 250 during summer cottage season.

David George Crockett, who lives a three-minute drive from Portapique Beach Road, the area where the first 911 calls originated, said Wortman once fixed his teeth at his home in Portapique.

“I’m very surprised,” Crockett said in a brief interview outside his rural home. “I never thought he would do something like that.”

“From what I knew of him, he was quiet, gentle and very easy to talk to …. He was very nice. He kidded around a little bit. He seemed normal, not like someone who would do something like this.”

A little farther down the rural road, another neighbour said he and Wortman were friends until the two had a falling out over a piece of nearby property.

The neighbour, who declined to give his name, said Wortman had burned an old shed that contained some property that belonged to the neighbour. The man said he was too overcome with emotion to say more about his relationship with Wortman or what might have motivated his rampage.

Christine Mills, another resident, said it had been a frightening night for the community, which was suddenly filled with armed officers patrolling the streets. In the morning, helicopters flew overhead searching for the suspect.

She said she was fearful the shooter might have gone through the woods and attempted to enter her home.

“It’s nerve-wracking because you don’t know if somebody has lost their mind and is going to beat in your front door,” she said.

Tom Taggart, a councillor who represents the Portapique area in the Municipality of Colchester, said the quiet community is in shock.

“This is just an absolutely wonderful, peaceful quiet community, and the idea that this could happen in our community is unbelievable,” Taggart said by phone from his home in Bass River, about three kilometres away from Portapique.

Taggart said he didn’t know Wortman well, but spoke to him a few times when he telephoned about municipal issues, and described knowing Wortman’s “lovely big home” on Portapique Beach Road.

With files from Holly McKenzie-Sutter, Michael Tutton and Jim Bronskill.