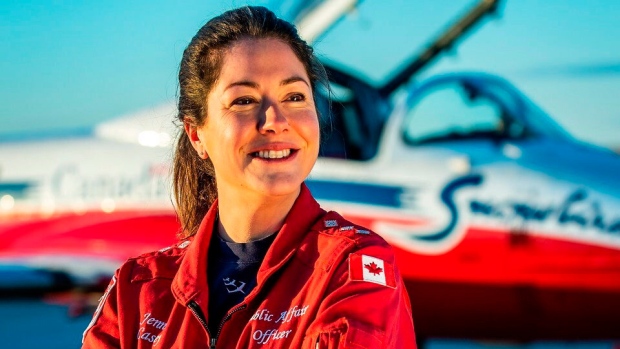 TORONTO — The death of Capt. Jennifer Casey in a Canadian Forces Snowbirds crash on Sunday is just the latest blow for Nova Scotia.

Casey, who had been the aerobatic team’s public affairs officer since November 2018, was from Halifax. She died when the Tutor jet she was flying in crashed just minutes after takeoff in Kamloops, B.C.

The pilot of the jet, Capt. Richard MacDougall, was able to eject from the stricken aircraft and landed on the roof of a home. He suffered non-life-threatening injuries, the CF Snowbirds confirmed via Twitter Sunday night.

“The RCAF has suffered another tragic loss of a dedicated member of the RCAF team,” Command RCAF tweeted Sunday night. “We are deeply saddened and grieve alongside Jenn’s family and friends. Our thoughts are also with the loved ones of Captain MacDougall. We hope for a swift recovery from his injuries.”

The crash happened as the Snowbirds – famous for their tight, nine-plane formation – have been undertaking a cross-Canada tour called Operation Inspiration, which was meant to raise Canadian spirits in challenging times. It began in Casey’s home province two weeks ago.

Casey joined the Canadian Forces in 2014 and was based out of Trenton, Ont., after working in radio as a reporter, anchor and producer in her hometown of Halifax and then in Belleville, Ont., according to her Royal Canadian Air Force bio.

Casey spent most of 2018 with the CF-18 Demo Team, travelling around North America and the United Kingdom with the NORAD 60 jet. She joined the Snowbirds in November 2018.

Tim Durkin, who worked with Casey at Quinte Broadcasting in Belleville, said they became fast friends when she joined the station in 2013.

“She just jumped right into the community and was involved with it,” he said. “Just somebody that, when she walked into a room, she just made you smile. She was a great person and a great friend as well.”

Durkin said she loved hockey — particularly the Montreal Canadiens — and they attended the world junior hockey championship together three years ago in Montreal.

According to her LinkedIn profile, Casey completed a master of interdisciplinary studies at Royal Roads University in 2019 and held a bachelor of journalism from University of King’s College and a bachelor of arts in political science and comparative world religions from Dalhousie University.

Nova Scotia has suffered great hardship in recent weeks. While dealing with the COVID-19 pandemic, a gunman killed 22 people in rural parts of the province. Then a military helicopter from the Halifax-class frigate HMCS Fredericton went down over the Mediterranean Sea, killing six people — three of whom were from Nova Scotia.

“Now they lose one of their own daughters,” Durkin said. “It’s something that the whole country reels with, but Nova Scotia in particular is going to be hit hard now.”

“For the past two weeks, the Snowbirds have been flying across the country to lift up Canadians during these difficult times. Every day, they represent the very best of Canada and demonstrate excellence through incredible skill and dedication,” he said in a statement.

Condolences are pouring in on social media.

“I’m honoured to have had the opportunity to have met her (and taken this picture) along with the rest of the team when they were in Barrie last summer,” Aaron Haberman posted on Twitter. “She was generous with her time and spirit and a great ambassador for the Snowbirds. May your spirit forever be at peace.”

“A Nova Scotian storyteller, she was a journalist before joining as a Public Affairs Officer. Across Canada and the United States, she brought stories and smiles. She was one of us, our sister. Captain Jenn Casey died today. Please say her name. Remember Jenn. -30-“