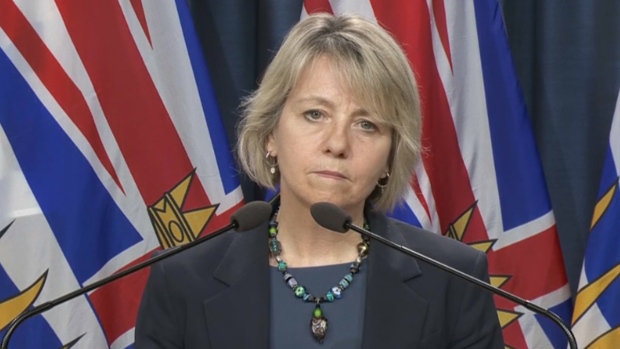 VANCOUVER — B.C. health officials say five more people have died from COVID-19 since their last briefing on Monday, marking the single deadliest day since the virus was first recorded in the province.

Provincial health officer Dr. Bonnie Henry and Health Minister Adrian Dix announced the latest fatalities on Tuesday afternoon along with another 43 confirmed infections. The death toll from the virus now stands at 24 in B.C., and there have been a total of 1,013 cases.

Previously, the most deaths recorded in a single day was three.

In addition, Dr. Henry revealed there have now been novel coronavirus infections at 19 long-term care homes and assisted living facilities in B.C.’s Lower Mainland. Each one is being treated as an “outbreak,” Henry said, even though the vast majority of the seniors’ homes have seen a single confirmed case.

That reflects the province’s “aggressive approach to monitoring, to testing and to preventing illness coming into our long-term care homes,” she added.

Officials also announced Tuesday that the Interior region of the province has recorded its first “large community outbreak” of the novel coronavirus, at an agricultural business in West Kelowna called Bylands Nursery that employs temporary foreign workers.

“Interior Health became aware of a number of the workers there with respiratory illness, and a number of them have tested positive for COVID-19,” Henry said. “The business itself is being quarantined and everybody is able to be isolated effectively in the housing – the very good housing – that is on site there.”

Officials did not reveal exactly how many people at Bylands Nursery have caught the virus. Staff and operators at the business have been very co-operative with the province’s efforts to contain the outbreak, Henry added.

Dr. Henry also noted that while that case count has now topped 1,000, some 507 people have also fully recovered from the virus. She again stressed that British Columbia is in a “critical juncture” in its fight against COVID-19, and pleaded with the public to remain vigilant and follow the necessary precautions.

“This is our critical time here in British Columbia, the next two weeks. We must be true to who we are in B.C.,” Henry said. “No one is immune to this virus but everyone can make a difference.”

Of the current active COVID-19 cases, 128 people are hospitalized, including 61 who are intensive care.

Officials asked older people who are more at risk of severe illness to stay inside, minimize their risk and rely on the community for their basic needs. Younger people have been urged to stop seeing friends face to face – even while trying to maintain a two-metre distance from one another – and to keep all social interaction online.

Dr. Henry also asked people to avoid unnecessarily travel, particularly from the cities to “smaller communities where they may not be able to support you if you get sick, and where we don’t have as many resources.”