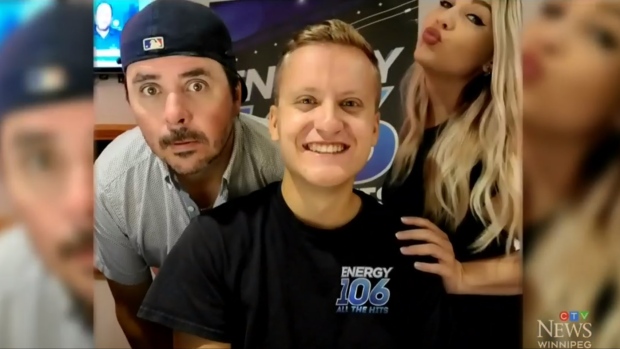 WINNIPEG — A familiar voice with a controversial past will be returning to Winnipeg airwaves starting Monday – it’s a move one advocate in the city believes is tone deaf.

Dave Wheeler is part of the new Energy 106 FM morning show, but the move isn’t sitting well with everyone, and it’s created a backlash towards the station and it’s DJs.

The switch came as a surprise to Sarah Nick, former co-host of Energy 106 FM’s morning show.

“I was handed a termination letter, they were going to restructure. They were doing some restructuring of the show,” Nick told CTV News.

Nick thought her co-host Tyler Carr would be next, but Carr called her to say he’d been asked to stay and was being joined by two new hosts, Dave Wheeler and Jasmin Laine.

Wheeler’s had some problems in the past while on the airwaves.

In 2018 he was fired from 92 Citi FM for making controversial comments about transgender people on his morning show.

In 2016 he was suspended for his involvement in a pair of YouTube videos that the community called racist and sexist.

Adam West, the program director for Energy 106 FM said he knows Wheeler can be polarizing, but said the station is an LGBTQ+ friendly workplace, and Wheeler knows what’s expected of him.

“We’re not changing for Dave Wheeler, he’s changed to fit us. Everyone who wants to see that, who wants to hear that will have the opportunity,” said West.

In a statement released by Energy 106 FM, Dave Wheeler said:

“I have done a lot of work on me. It’s profoundly personal when you take a deep look inside. I have put it all in the rear-view.”

Carr said he’s excited to start the new morning show, but he’s getting a lot of negative feedback online, including a death threat, even though he’s part of the LGBTQ+ community.

Executive Director of Rainbow Resource Centre, Noreen Mian believes hiring Wheeler, given his troubled past was a tone deaf decision.

“This individual has a history of alienating marginalized communities, and has had a public forum to do so, and he’s being given a second chance.”

Mian feels for Carr, who is in the position of defending his role as a DJ, as well as his identity.

Carr said he doesn’t approve of the comments made by Wheeler in the past, but that’s not the Wheeler he knows.

“I have a lot of forgiveness in my heart. I want more allies, and Dave Wheeler is one, and will prove that he is one,” Carr said.

Nick said the last couple of days have been tough, but a lot of people have reached to her since she was let go to offer their support, including Mayor Bowman and Energy 106 in Belfast, Ireland.

“I do believe that one door closes, and a new one’s going to open,” Nick said. “Maybe everything will work out.”