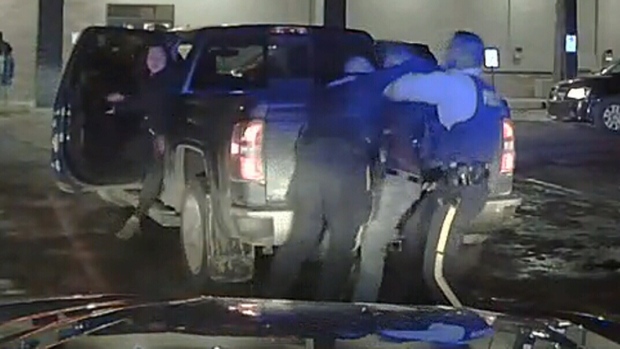 TORONTO — New footage has emerged showing officers punching and tackling an Alberta First Nations chief as they arrested him over an expired vehicle registration.

Athabasca Chipewyan First Nation Chief Allan Adam had previously said that he was leaving a casino in Fort McMurray, Alta. after 2 a.m. on March 10 when officers confronted him, his wife and his niece about an expired licence plate tag.

The 12-minute dash cam video, obtained by CTV News, shows an officer attempting to arrest Adam, before another officer tackles him to the ground and punches him in the head while he is being restrained on the ground.

During the altercation, Adam suffered a deep laceration inside his mouth and said previously that he fought to maintain his consciousness while blood poured from his mouth.

Adam was held in custody overnight and released in the morning. He was charged with resisting arrest and assault police in execution of duty of the criminal code and is expected to appear in court on July 2.

Initially the RCMP said the officers’ actions were reasonable and did not meet the threshold for an investigation. Police later announced that Alberta’s Serious Incident Response Team would look into the incident.

Adam has called for an independent investigation into the matter and for all officers to wear body cameras.